For the last several rides, I have slowly been asking JB for a little more , a little more distance or a little more speed, or tested him in challenging terrain. Each time, he is meeting that challenge and surprising me with his abilities. For whatever reason, he is really coming into his own and all the doubts I was having even just a few months ago, are slowly fading with each ride.
This past week I didn't get to ride but once (a six mile speed run) due to hours at the office . This weekend I joined a friend for a hill day workout. We would be heading west of town to Ashley Mountain and Lupine Lake trail. This was new territory for me but it offered some great technical training trails along with some serious hill climbs, water crossings , great scenery , and the opportunity to run into Moose or possibly even a wolf or two. (hopefully not!)
The first 1/2 mile of the trail decended us down, down , down into a creek bottom. Going downhill is hard enough on a horse, but add in large rocks, stumps , a sharp corner with a shear drop off,and it makes it all the more a challenge. There were areaa on this part of the trail that made me thankful I had JB responding to leg , hand and seat aids effectively. JB hasn't figured out that going downhill is easier if he gets on his haunches but he took his time which is the first step. There were spots where he had to drop off a ledge of rocks. He would stop to look at the footing before he stepped down. Exactly what he needed to do.
After the initial steep decent, the trail leveled off for a while before it started a gradual climb up to the lake. In various spots, it opened up enough to do a little trotting. We reached Lupine lake, about 3 miles into the ride. JB was already pretty sweaty.
We took about a fifteen minute break here at Lupine and there was one fisherman in the background. I shared my sunbutter and apple lunch with JB, who ended up getting most of it... Oh well, I was happy to share! He also got a few carrots as well, which he knows I pack along with on every ride!! I offered him a drink but he wasn't interested. 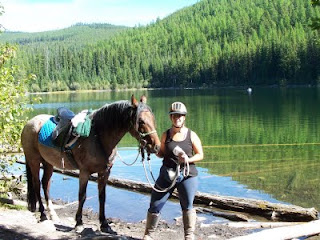 We headed out and JB took the lead. For the next 3 miles or so, the real climb began. He wanted to rush a bit on the uphills but since it would be a long climb I had to check him back and make him take his time. At about a 1.5 miles of steady , slow but steep climbing, I jumped off and led JB for a while to give him a break. As good as he has been going, I did want to over do it with him.

We finally arrived at the top, and JB was definitely tired. I am not sure what the elevation was exactly but high comes to mind. We popped out onto an old logging road. I loosened JB's girth , let him graze, and offered him a drink out of my water bottle. He wasn't too interested but was definitely hungry. While taking our rest, some hikers came along with a blind dog. We visited with them about the area and even got some information about some other trails in the area. After about 15 minutes the horses seemed to be recovered and we headed back down. We both led our horses down the steepest parts.

The decent we made in the first 1/2 mile of the trail was now a steep climb out as the last hurrah before our day was over. I wasn't certain JB would have enough gas in the tank to climb out of there but to my surprise, he scampered up that hill like a champ. He had definitely figured out how to push himself off his hind end in climbing.

It seems JB is really coming along and proving himself not only as good endurance prospect but a tough little mountain horse as well! It's been a long road for us and I couldn't be prouder of this little horse. He just keeps getting better each time we go out on a ride. I only wish it was the beginning of the season instead of the end! 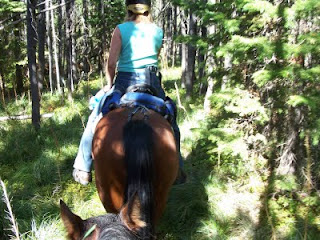 ****By the way, we never did see any moose or wolf, thankfully.

Woohoo! Sounds like a great ride, and congrats on JB's progress. :) Did you have boots on him? What kind? I just bought a set of Gloves for Consolation.

Tamara- It was great,a challenge but a good challenge. I have been keeping JB in boots for everything. He goes in the Epics and I also use a 12 mm cushion pad of medium density. The gloves don't fit his hoof shape. His feet are not overly big but very round. The pads also help keep his foot from sinking too deep into the boot since his feet tend to be small. The Epics seem to work really well for him. We have crossed water in them and lots of mud and they seem to hold up well, minus the *squishing* noise after crossing water. Good luck with the gloves. Let me know how they work out. Sounds like Cons is really coming together for you. Isn't it the greatest feeling?