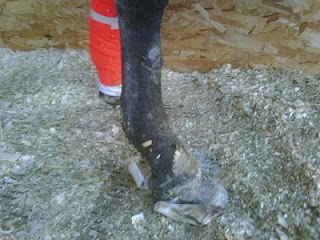 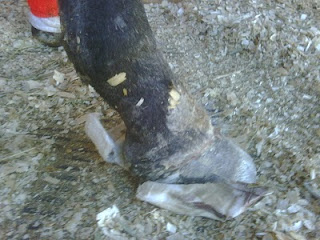 I forgot to grab my camera before the vet got there and these were taken with my phone, not the best quality but you can kind of see.
This JB's leg right after the vet removed the cast. Pretty ugly looking in these photos. There is still some swelling and it actually makes the hoof look completely disfigured, which its not. It's just the way the picture looks, thankfully. Ofcourse, angle wise, the hoof is off and the surgeon's farrier skills when he trimmed the foot during surgery to fit inside the cast leaves much to be desired...
....Nonetheless.. (I am trying not to friek out about his hoof after working for two years getting his feet right!!) we knew JB's hoof was going to need some rehab after all of this. The stitches were removed which were on the front of the pastern. The incision looked really good. JB has a few sores from the cast, a couple at the back of the fetlock joint and one on the front of his cannon bone but none of them were very serious and it's apparently to be expected to get a few
We washed his leg really well, which must have felt wonderful (although JB was pretty well drugged so he probably didn't notice). JB then got that foot trimmed once again,(yes, I was cringing) but it was a necessary eveil. Luckily, my vets farrier skills are far superior than the surgeons but still, JB had to have his foot trimmed down to a very small size (removed alot of the wall) to lessen the torque on the joint. As a result, poor JB's front left is bigger than his front right. His other three feet have had limited trimming as well. As you can imagine, he had difficulty bear weight on his injured leg , which made it difficult at best to get his other 3 feet trimmed correctly. We mostly rasped what we could , for as long as JB could withstand it, and that was brief. Right now, his feet aren't in the greatest of shape but we'll worry about getting them fixed over time.
JB is now in a cushy , soft support wrap and is hobbling around fairly well. He will remain in that for a couple weeks, which has to feel so much better than that rigid old cast. At that point, we will do xrays and see how things are progressing.
His risk of injury is certainly still high at this point but without the cast, he seems to be even more careful in moving around his stall. I am sure it's quite sore without that extra support and that leg is most likely weakened extensively.
So that is the latest and greatest... I am so relieved that cast is off of him and he made it the full six weeks..
Good Job "P"... you've been a real trooper through all this.
Posted by Jonna at 10:20 AM

You guys hang in there...I'm hoping for a very good outcome for your horse. ~E.G.