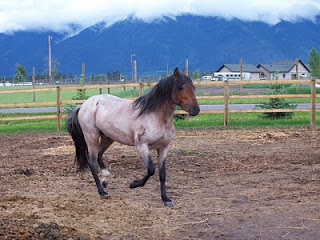 April 28, 2010 is etched in my memory as one of the scariest days I have ever had to experience with one of my horses. This was the day JB found himself hung up in a gate, hanging upside down from his front right pastern.

May 21st, 2010- JB went under the knife to have Pastern Arthrodesis surgery to repair his damaged leg, facing a 70-80% chance of returning to a usable horse, and I , staring down the barrel of many months of doctoring him through his recovery.

November 20, 2010- is etched in my memory as one of the happiest days I have ever had to experience with one of my horses. 1 day shy of JB's 6 month post surgery and an appointment at the vet for his 6 month radiograph; the moment of truth; to see if the fusion was successful, if the joint had knitted together correctly without the body adding too much extra bone or calcification.

The fusion was a success. JB has healed exeptionally well. In Pastern Arthrodesis, one of the main concerns is that the body will develop a large amount of additional bone or calcification at the site of the metal plate that held the joint in place (along with 5 screws) Often times, in response to the inflammation at the site of the plate, too much calcification can occur, and this makes it more unlikey that the horse will return to soundness. In JB's case, he developed only a small amount of calcification which should not hinder him. The vet was very pleased with how everything looked and the joint is solidly fused.

JB still short strides on the front right and this should lessen over time as the suspensory ligament and other supporting tendons adjust to the change in mechanics of the leg. The joint that is now fused will no longer serve to absorb shock like it once did. The other structures above and below the joint will have to take on the additional burden.
It's something I am going to have to keep an eye on over the course of time and possibly support with sports medicine boots.

So what happens now?

JB gets to go back out to a pasture for the winter. He gets to be back with other horses and during that time, he continues to heal and get stronger. Ofcourse, I worry about the footing. It's winter and it can get icey, but I am going to have to trust that JB will continue to take care of himself as well as he has through this entire process. He deeserves his freedom, afterall, he's earned it. It's been a long arduous process.

In the spring, JB will go back to work under saddle. The vet doesn't believe there is any inidication that he won't be able to tolerate limited distance in the future, noting that it may take 2 full years before that can happen but not to give up hope.


I wanted to say Thank You to all of my readers for all the support , prayers and encouraging words many of you sent our way during JB's surgery. Words can't express how much it helped me keep going, even during some of the more difficult days of his recovery.
Posted by Jonna at 7:50 AM

Contratulations! That is Awesome news.

Yay! Yippee! Hooray! What a relief.
- The Equestrian Vagabond

I am so happy for you!

What great news! Happy Thanksgiving to you and JB.
Karen W.

Truly a wonderful result. I know how much work and worry went into getting this happy recovery. Congratulations, and Happy Thanksgiving.