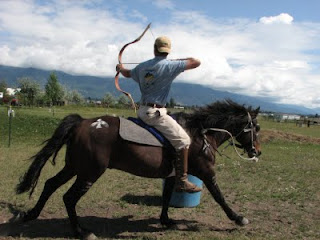 That's exactly what my husband is about to do. Tom just headed off to Europe this morning. I wish I had been on that plane with him but for various reasons, it didn't work out logistically.

This is a huge opportunity for him and I am very proud of him. It's really one of those situations that kind of fell into his lap but sometimes those are the best way for things to happen.

For those of you that don't know, I am lucky enough to be married to someone who is as crazy about horses as myself. He's also pretty darn talented in the horse training department as well and I say that as objectively as possible. Tom has been breeding, training and riding for ...., well, forever it seems. Most recently, he got involved in a bit of a unique equestrian sport called Horseback Archery. It has become his ultimate hobby and passion. No, it's not the Native American genre of horseback archery. It pre dates that by may years, back to the culture of the Steppe warriors.

In the village of Kaposmero in Southern Hungary, Master Lajos Kassai has founded a school of archery and has dedicated his life to recreating the ancient traditions and culture of his people. He also holds a few noteworthy world records, shooting over a thousand arrows in twelve hours.
and the second world record was in 2002, out of 286 gallops, shooting about three thousand arrows in twelve hours. I think there is a third world record as well but anyone can look it up on the Internet if you are really interested.
let me just say this, the man is impressive to say the least.

I can't do the sport justice in trying to explain what it's all about, but just imagine taking a horse in full gallop , with the rider shooting with the bow, (so no reins) hitting target after target, front, side and the "parting " or back shot. The horseman has to be in sync with his horse and and in total control of himself. The power of the galloping horse combined with the total concentration of the archer. It is a reflection of a complete harmony between man and horse.

The main school resides in Kaposmero,Hungary but there are many other subsidiary schools; Germany, Austria, the USA, Canada, Slovakia, Greece, New Zealand, and Norway.

I have watched my husband train for 5 years now, coming up through the ranks of the various levels through rigorous training and testing for this mounted martial art, and now, all his hard work has come to a point where he has an opportunity to go to the main school, aka The Valley, in Hungary, and partake in an international festival and training with Lajos Kassai himself.

But, before all of that, as luck turns out, Tom will be involved in another unique opportunity.

Tom is first headed to Munich , Germany where he will be putting on a 4 day horsemanship clinic for German Horse Expo. This all very overwhelming and came on the heels of the German Archery school. with Pettra Engelander. Pettra is the leader of the German Archery school. With the encouragement of Tom's own teacher and leader of the USA Archery school, Todd Delle, Pettra and Todd arranged to get Tom to Germany to put on a Horsemanship clinic. It's kind of complicated how it all came to this (and I am trying to shorten it for brevity purposes) and almost unreal when I think about it all! . So, Tom , who is quite modest about his training abilities and never wants to be in the public eye, is going oversees to try to help some Germans learn something more about horsemanship.

Something like this doesn't always just come along. I am very proud of him and all of his hard work that has brought him to this point. I can't wait to hear how it's all going.
Posted by Jonna at 7:19 AM

I have read of this ancient art. It was practised by many of the Asian Steppe warrior classes. Seems that the "parting" shot is where we get that saying from!

But good luck to Tom and all who revive the old arts!

I have shot a bow and arrow off of Ozzy, but nothing like this. SO COOL.

The opportunity sounds absolutely incredible. Btw the pic on your post was wonderful - I haven't seen a pic of the sport that captures the essense so well before...

@Cheyenne-yep, that is exactly where that phrase came from!

@Dom- hey, in my book, just attempting this is saying alot.. It's not as easy as it may look..good for you!

@Mel-it really is a great opportunity.Glad you like the pic. Honestly, that wasn't one of my favorites but it was all I could find easily! I'll have to find some others and post them..

wow - unreal is right! talk about an obscure talent! There must be something in the DNA that passing down over thousands of years to the few lucky people now.
- The Equestrian Vagabond