About a year ago, I had to say goodbye to my good friend, Munci. It was heart wrenching. For 12 years, we were inseparable, best buddies. He saw me through a lot of life ; 3 moves, numerous jobs, bad decisions, and miles upon miles of trails , both tagging along behind the horses or at my side for a hike or run. He was my chore buddy, my nurse when I was sick , my guard dog when I was threatened and my best friend. He withstood a brutal attack from a Mastiff to keep me safe. We spent some of our best days together chasing rocks and minnows along many Montana rivers and lakes, In the end he developed lung cancer. Always a stoic being, he hid any symptoms that he was sick. We didn’t know until it was so far gone there was nothing we could have done. I only had a few days and our time together quickly came to an end.
The topic of getting another dog has come up a lot lately but a subject I tended to shy away from. The thought of another dog was more than I was ready for. The thought of a puppy was even more alarming! Losing one dog is hard enough but we had actually lost three dogs with a year and half time. We both missed all of them terribly but for me, I decided that when the time was right for another dog, a dog would find me, just like Munci did.
Things have a funny way of working out but through a series of events and happenstance networking, we were put in contact with a German Shepherd rescue facility about 3.5 hours from home, which also happened to be 5 minutes from friends of ours who we happened to be planning to go visit on December 23rd, which just happened to be one year to the day of losing Munci. Life is so weird sometimes.

German Shepherds have always been my first choice in dogs (grew up with them) and I always thought that someday I might like to get another one.. just not now. Nonetheless, since we were going to be in the vicinity anyways, I was convinced that I should go have a look, meet the lady that ran the rescue and just "see". Tom threw the doggie travel crate in the car when I wasn’t looking.…hmmmm.

Well, here is what we came home with. Meet Xena (my Warrior Princess). 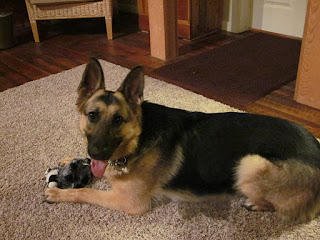 She 18 months old and has a little history. She grew up with a family but had to be given up due to employment difficulties. She was then adopted out to another family but it didn’t work out due to allergies. As a result, she has some anxiety as she has been bounced around a little. Who wouldn't? German Shepherds are generally one person /family dogs that bond very closely. She seemed to take to Tom and myself pretty quickly during our visit. I guess the deal was sealed upon seeing that. She knows her basics and has a sweet temperament. She needs some doggie socialization time but otherwise, her worst habit is jumping on poeple when she wants to play. She isn't a chewer , shows no signs of separation anxiety, and not a barker. She isn't sure about the cat yet but she hasn't shown any aggression either. The horses were totally new to her but she is quickly getting into the chore routine. It seems her biggest downfall is that she just hasn't been exposed to much in life. We'll change that!!

In just the few short days we have had her, she has definitely filled a void in our lives that I didn’t want to accept was missing.
Yah, I am a little smitten…

Congrats on the new dog! Every time I see a boxer my heart seizes up, I miss my three that have gone SO MUCH. We are down to one ancient, and lumpy Rat Terrier, who we love. I can't imagine an empty house. Much as I love horses, dogs are my animal familiars in life. ~ E.G.

Hey, Congratulations!! I just blogged last week about our new canine addition- Bo, he's a Australian/German Shephard cross and is about 1yr. old.

Ah, congratulations! She is very nice.

When we lost our newfy a few years ago, who would go with me when I rode, but could only last about 3 or 4 miles, I decided I wanted a dog that had the endurance to stick with me on a ride. Someone recommended a GSH. I found a white one on Craig's List.

There are so many things I love about this dog. His brains, his loyalty, his looks, his endurance... He is a little shy around other people which make them shy around him which concerns him. My friends say it keeps me safe. :) And that dang herding instinct.... if I slow when riding, he thinks he needs to push us along. The horses are all used to him and his pushiness and for the most part ignore him.

No regrets, he was the right choice for this horse girl & I am sure you will find the same thing in your new girl.

EG- I know about heart seizing.. I have seen several dogs that have some resemblance to Munci and my heart always stops... no one will ever replace him in my heart.
CG-thank you and congrats on your new addition. I will have to go check out your blog(something I am not good at keeping up with !)
Tammy- That is great. I definitely wanted a dog to go along on rides with me. I recognized Xena's athleticism right off which was part of the lure. I suspect she will be able to go the distance once she becomes accustomed to the horses.

She's just beautiful! Congrats on hooking up with her - it sounds like she's got a lovely future ahead of her.