This past week absolutely flew by. I can't believe I have to log into my computer tomorrow morning and get back into work mode. Ughh.. The first half of the week , we didn't get much accomplished because the hubby was sick after getting what I had the week before , and I was still recovering.. and .. still still recovering. Will this virus ever give up?

Actually, I think we are mostly back to ourselves , sans an unrelenting cough and some mild congestion. We finally managed to get a few things done  on the "to-do" list starting last Wednesday in spite of Mother Nature having  personality issues. Out to-do list was alot of fits and starts. We did manage to get the paddocks all scraped out with the help of a friends tractor and I was in charge of harrowing the pasture with a 4 wheeler. . It took me two days to get that task done because my hands and toes would get so cold in spite of gloves. I could only go for about an hour and then have to come back in to warm up.

Nonetheless  it got done. The pasture is harrowed and the paddocks are clean and tidy prior to fly season. I even managed to get the north pasture reseeded.

Wednesday I had my second lesson with a new trainer I am trying out for jumping. It  was a group lesson that consisted of a group of 2, me and one other young very green rider so it wasn't really very helpful to me. I haven't decided yet if I will continue to use this trainer. Its a bit early to tell. I like some of the feedback I am getting from her but some of the other feedback she is giving is leaving me scratching my head a bit.  I might give it a few more times before I decide, just to give her a fair shake.

By Friday , friends arrived for the weekend and it was time to spend two days getting some intense instruction from said friend for me and Brego over fences. She spent several years eventing and agreed to come for the weekend for some lessons.  I felt honored to have so much of her time all to myself and all I had to do was feed her for the weekend. I had to ride in some unruly weather , including "gropple" (it's a real weather term.. go ahead look it up) . We did the riding lesson version of "twoadays" , a morning and afternoon session both days. Aside from the fact that my legs are really tired tonight ,  I got more out of those 4 sessions than I have gotten from any trainer I have worked with for the last couple of years.  Not too many good trainers here unfortunately. Brego and I worked on cadence , rhythym at the canter and introduced him to some gymnastics. He did a great job. Its not easy to be bringing along a green horse over fences and also to be working on getting yourself better at the same time , but Brego is being so incredibly good. It's coming together.

I hate training alone so it was really nice to have someone there to help me with some things I was struggling with .  As far as the saddle issue, I think I mostly resolved it , surprisingly with a wither relief pad , which was a total fluke. I thought I would just try to switch out and add the wither relief pad under my saddle to see if it helped, not really thinking it would. Well, it worked. It gave the back of the saddle just enough lift to balance it out.I rode in it and it really made a big difference but I still felt like it was harder than it should be to stay in position. Likely, that would correct with more time in the saddle practicing without stirrups. Maybe. The question of whether a new saddle would help the issue was still a real possibility.

Fortunately, my friend brought along her old eventing saddle which is an AP saddle,  just to try out and give me something to compare to. It has ALOT more leg support, and a deeper seat than I am used to riding in over fences but I thought it couldn't hurt to try it. To my surprise, it fit Brego relatively well with enough shoulder room which is his biggest issue.   Right away, it was amazing how much more secure I felt in it and suddenly, I wasn't fighting my leg position. I felt really solid in it and Brego didn't seem to be having any trouble in it . In fact, he was almost feeling like he was better because I was more balanced. My friend was nice enough to leave it with me for the time being so I can use it for now.

Just for comparison, here are a couple of random photos of the two saddles, my Close Contact Collegiate (top photo) and the County Eventer AP (bottom ) I am now trying out for a while.  It probably makes sense to find a saddle that I feel more secure in. The close contact has no knee rolls and the seat itself is pretty narrow and flat  but darn,  I still love that classic look of the CC. 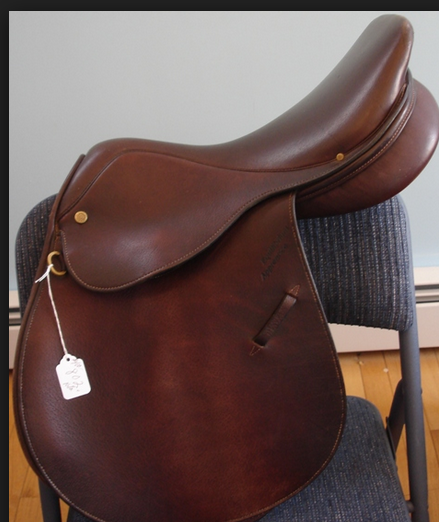 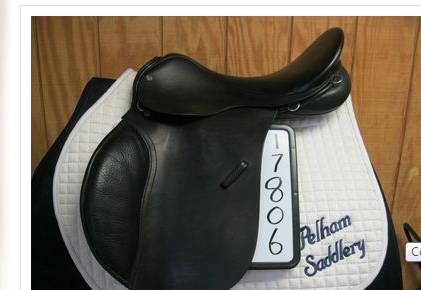 I thought the AP was going to make it harder for me to get into jump position because of the deeper seat, but it didn't. It literally put me right where I needed to be. Can't deny that.

I will keep my eye out for a used one  like the one I am tryng but they can tend to be pretty pricey. I might need some time to save up enough to get one, even used. I ran across a Duett jumping saddle online for a really great price. I already own one Duett Companion Trail saddle and it is by far my favorite saddle I have ever owned. I can only assume that their jumping saddle model is just as nice. I am considering it.

If anyone wants to twist my arm, the Collegiate is probably going to go up for sale. (insert sad face) Contact me via email for details if anyone is interested. It's  really a nice saddle but just not the right fit for me. I am 5'5 but the length is too short for even my short legs. My thigh is 21" inches long, if that gives any frame of reference.

Progress that we made over fences this weekend.

The big thing was cantering to a fence. We had previously only trotted into a fence and could not seem to get enough impulsion to land and canter off, to approach the next fence.

It seems we are off to a pretty good start over fences. Brego is better than I thought and I am getting more confident in him and and myself each time.

So what about Endurance???? I haven't forgotten. It's just that trails aren't really clear yet.  I would like to attend an LD ride in September with Brego. I think I should be able to have him ready for something like that in between jumping. I was invited by a friend to ride her horse in a June ride. I am planning to do it,  It would be my first 50. I didn't really see my first 50 being on someone else's horse but honestly, just being  able to experience a 50 is worth it. It's been a long time goal.


Back to work tomorrow. Signing off for some sleep.