Working from home is awesome on days like we have had lately.  I can work from my back yard while working on my tan. (Damn, my legs are white!) We are having unusually warm , sunny and dry spring.
spring rains seem to be going everywhere but here. Surrounding areas are getting drenched while we have had to start irrigating .  Hay might an issue both in availability and price this year.. alot of hay farmers here don't have irrigation since we typically get enough moisture.. exept on dry years like this year.  I think we are in for one of those hot dry years which also means a bad fire season. We haven't had one for a long while.. guess we are due.

Lots of things going on around here so I will try to summarize. Most noteably, and most impacting to life in general was my weird back dilemna last week. Last Monday morning,  I woke up, swung my legs out of bed, bent over to give Duncan his customary “good Morning” belly rub , and found myself stuck. I could not straighten up. A sharp twinge in my lower back and I literally could not move. I dropped to my hands and knees and slowly clawed myself into a mostly upright position using the bed. Walking  was nearly impossible, standing up straight was impossible , walking , twisting or bending caused excruciating pain.  I couldn't help but remember the Seinfeld episode , "The Pen" when Elaine slept on the  couch and woke up with her back all messed up..and then took too many pain meds.

"STELLLAAA" (ok, if you haven't seen the episode, you need to!)

It could have  been me.. easily..
if I kept heavy duty pain meds in the house, it would have been me.
I was that desperate.

I suffered through two days of hobbling around before finally calling my chiropractor, which I dreaded the thought of , the idea of  being”cracked” was enough to make make me vomit. But , I also knew I couldn't stay like I was,  and he probably wasn't going to create any more pain for me than I was already in..I had nothing to lose..

Apparently I had something call "Meniscoid Entrapment” which is a fancy term for the cartilage disc known as meniscoids getting caught between intervetebral spaces. As it turns out , sudden or non-physiological movements, cause these little meniscoids to get caught where they don't belong , causing a spinal blockade and pain. ( I 'll can confirm the pain part) From everything I read, manipulative treatment is the best option.

Ice, ibuprofen and limited movements that involve twisting was the order . By that night , after the adjustment, I felt about 50% better and could walk mostly normal.  Another 24 hours and I was mucking paddocks again and lifting hay bales without too much pain.

So, in between all this back stuff happening, my trial saddle arrived. It arrived three days before my back thing but I didn't have time to try it on any of those days so it sat.

On the second day of back misery, (now five days into my trial period and still no idea if I would like it) I decided I better give it a go. Time was ticking.

Somehow I thought that it might not hurt so much once I actually got in the saddle??

T made several attempts to talk me out of my crazy fooled idea but I wasn't going to listen so he figured he could atleast do damage control  He agreed to help me get in the saddle,  since I couldn't really move my legs  or pretty much do any of the movements needed to actually get on a horse. We should have taken video .. it was pretty hilarious, although I wasn't laughing at the time..

As soon as I sat down, I was proved wrong in my theory .

Nonetheless,  since I was up there,  I walked around and tried to do a little posting trot to try to get a feel for it.  It was a major fail all the way around because I was so tense and in so much pain I was riding weird. Brego was pissed because I was so tense.. and it was just not working out . So, slowly and cautiously, I slithered back of the horse with T's help.. and promptly went in the house to get my ice pack again.

I have ridden in it since the back issue resolved and the verdict is : I love it. I was just going to buy the trial ,even though it was the more expensive leather version

However, that plan also kind of went sideways. The trial they sent me had a flaw in the panel. 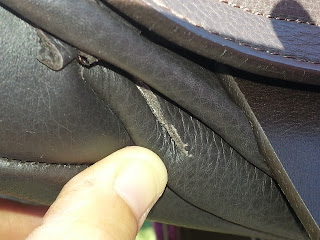 The leather literally had a slice in it on the panel. It's a wool flocked panel.  So even if I wanted to keep that saddle, I couldn't.  It's not even really repairable because of how the panel was shaped as a result of this cut.

The bad part is that to order a new one, it takes 10 weeks (backordered from England) which totally sucks. Considering the situation,  the dealer offered to  let me keep the trial until the new one arrives since they can't sell this one anyways and it's getting returned to the manufacturer as a dud. I thought that was pretty nice.

So I have a new one on order and I did stick with my original plan and order the saddle that is part leather/part synthetic  (seat, knee and trim are all leather so the riders gets the feel of leather where it matters.) The price difference was just too much for the budget right now.
Here is my review/ impressions of the saddle.

My hubby didn't go to Canada over Memorial day weekend as planned for his Archery competition which meant we got to go fishing in our new little fishing boat!!!. (and by little I mean 12 feet long little) Its for lakes mostly and while  it’s a far cry from my  Dream Pontoon boat, it’s sure to provide some fun summer days on the water. 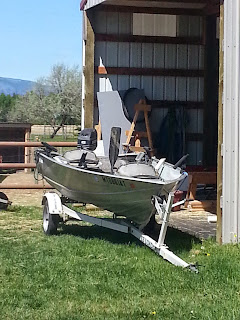 We also got a few things done around the place over the long weekend like finally getting my feed room and tack room repainted. They used to be an ugly brown color and for years I have dreamt of little red barns which match the trim on the hay barn..

I finally got them!

Jump Training-
I lost last week of riding due to my back,  but had a good lesson this week, aside from one little snafu where Brego thought he needed to jump a 2' fence like it was a 4 foot fence and nearly unseated me on the landing. Yikes.. had I not been in my new trial , very supportive saddle, I probably would have come off!

We are planning to attend my first Mini Event with Brego this weekend. I am just doing one jumpers class.  It's a super casual atmosphere where my trainer can be coaching me through the entire time which is good because I will likely be so nervous I will forget the course.  Luckily it will be super small fences and its really just about trying to see how Brego and I handle the show ring.. Keep you fingers crossed for us!!