This past weekend I had the opportunity to attend a 50 miler, my first!

A friend (and co-blogger) and I had been chatting for several years about joining forces at some point and doing a ride together.  However, it never quite worked out. This time , it did.  While I didn't have a horse of my own, she  had an extra one that was fit enough to do a 50. She was kind enough to offer me a chance to ride. I was grateful and excited.

With a little planning and alot of finger crossing it somehow all came together.

Last Thursday afternoon I hit the road, to make the first half of the 10 hour drive , stopping off at another friends place for an overnight. Her place was about the half way point of the long drive and I was more than happy to have a mid way break in the trip. Making a 10 hour drive in one shot, then riding 50 miles the next day didn't seem too appealing to me. I had a nice visit with J , who moved away about a year ago . She was my favorite riding partner so it was great to catch up and see her again at her new place. She now lives with as many Desert Hares as she does with horses. I have never seen such giant rabbits.. ! She is a bronze artist and she showed me some of her new pieces in her new shop that she was working on. She does amazing work!

Friday morning came too quickly, and I said my goodbyes to J to hit the road again and make the remaining 5 hour drive. I was anxious to get to ride camp. That second half of the drive seemed like it took FOREVER!   As it turned out, my parents were coming the other way, on their way home from Arizona and the plan was to try to meet up in Idaho somewhere for lunch so I had that to look forward to . Unfortunately, the timing didn't quite work out and we just ended up honking as we passed each other on the road. I was grateful for my audiobook, a Janet Evanovich  story which are usually guaranteed to be entertaining.

Finally, I turned onto the final stretch towards ride camp and happened to fall in behind Tamara's rig.  That worked out great because I would have been so lost. Honestly, the directions to ride camp could be improved upon to instill a little more confidence in attendees that they aren't going off into no mans land.

We got the horses settled in , and I got my new  "60" second tent set up which took more like 3 minutes and 60 seconds and an extra set of hands,  because apparently it wasn't completely dummy proof. (camping is something I came to later in life and haven't done a ton of it, especially on my own so cut me some slack) .

We took a short "trial " ride so I could get to know my ride , Maji and get my stirrups adjusted. Then we vetted in and it was time to we make our way to ride meeting.

The plan was we would go out , climb to 7500 ' elevation , arrive at a mecca of green grass and cold water at a stock tank,  turn around, and make our way to the first 30 minute vet check  at 15 miles.

Then the second 50 minute vet check would take us back to ride camp, completing the first 25 mile loop. There was a lot of climbing on loop one. The second loop was all 25 miles and no vet checks. I thought this was kind of odd .

Once ride meeting was over, Tamara and I got a few minutes to sit and chat and finish a beer, while being fully entertained by the tiny adorable mice that were  running from sage brush to sage brush around our chairs.  I was just waiting for a giant Owl to come down and leave claw marks on one of us.

A mostly sleepless night for me in spite of my usual dose of Melatonin followed and before I knew it , it was time to saddle up and head out. The start was totally quiet and unremarkable for us, which was great. We made our way up , up and up, to our  first turn around point at a water tank. We were going alot slower than what Tamara typically would ride  because Maji was challenged by a couple of things. One, she was carrying me, and at the risk of self deprecation, I am not exactly in the lightweight division and she had only ever carried a much smaller rider. She was carrying an additional 30 lbs. She also had not done much training at elevation. I got off and walked a few times , to give her a respite on the tougher climbs but also to stretch my legs and keep my knee from getting too sore. 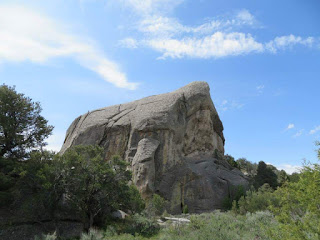 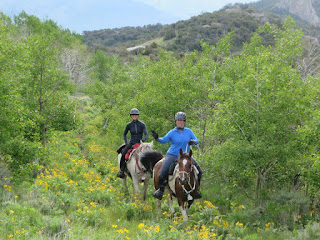 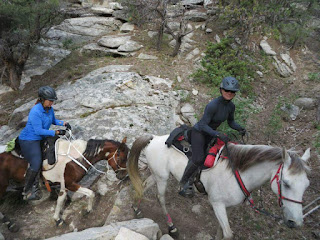 Several  LD riders, including a pack of riders on mules caught up to us at the turn around point and it was here that  I started to see why there is  such a division in AERC with LD riders. There were several riders in this pack that were definitely "racing" and risking their horses/mules well being in my opinion.  I had not seen this in previous rides and given that all I have ever done were LD's, I was surprised. When we all arrived in at the first vet check, one mule was having trouble getting to criteria . Tamara and I sailed through , HR's were down well below criteria. Maji got a B on gut sounds but Tamara thought that was fairly typical for her at this point, given the climb. The mule people remained, arguing (actually yelling) with vets.

We rolled our eyes, bit our tongues and headed  back down the trail.

Before we knew it, here came the guy on the mule , so we let him pass.

We made it into our 2nd vet check. She pulsed in at 56 ,  A- on gait and the vet kept us at a B for gut sounds. She wasn't quite as animated in her gait , thus the A - . However, she was eating and drinking well so there were no other red flags or a reason to not continue. The B for gut sounds was that they were a little quieter than they liked I guess. I had no baseline for what her normal was. The first loop took us about 4.5 hours.

Before we knew it , it was time to head out again and off we went to complete that second long 25 miles, with no stops. We again did alot more walking than we had wanted to but I wanted to make sure Maji wasn't going to be over ridden. She was being a real trooper and I wanted her to finish this ride, even if we were in the back of the pack, which we were. It was ok though , other than it  meant a lot MORE time in the saddle.  Tamara was planning to do a 100 in a few weeks on her gelding, a long slow ride was just fine and maybe a good thing for his conditioning.

The last 10 miles of the ride , we were playing peekaboo with a thunderstorm . I had heard several stories from last year when several riders were caught in a wicked electrical storm. I was not hoping to repeat that. We went as fast as we reasonably could, where we could. Several sections were pretty technical so we had no choice but to walk.

We finally made it in, and the storm had luckily moved off. We finished at 5:03 pm. We shaved off a half hour from our first loop, finishing in 4 hours.We thought, hoping at this point, that we were last and might get the turtle award but there were two riders behind us yet.. Boo..

We got the horses settled in , had  dinner , and  made  a dash for the hot springs down the road. I have never been so happy to sit in Hot Springs. That was exactly what I needed after 8.5 hours in a saddle.

For my first 50, I really have no complaints. I was sore,and still am. Mostly my calves and quads but that was because I had to keep my stirrups longer than I might normally , due to the blevins buckles on the saddle, which I was not used to. It was a small price to pay in my opinion. Given I had not done much trail riding at all, my "owies" were not as bad as I thought they would be.

The drive home  was again broken into two separate trips, this time going to a different friends house in a different direction, for different reasons that weren't for fun.
This friend's husband had become ill and now had been sent to ICU. It was not looking good and his time was short. I went to their home to spend the night with the dogs so they would not be alone and more importantly, it would allow my friend to stay with her  husband and not worry about things at home.  He has since passed. Yesterday was a very sad day. He was the kindest, gentlest man I had ever come to know and he will be missed greatly by many people.

I guess sometimes, with the good comes the bad. I have so many mixed emotions from the weekend. I am tired, sad and at the same time feeling so blessed that I was given an opportunity to do something like this.  It was a good reminder that we never know when our time is up and we should take every opportunity we can to live life to the fullest while we can.

See you down the trail!

What an amazing opportunity, congrats! I am a little in awe of people brave enough to ride an unknown mount for 50 miles. Looks like lovely trail, and beautiful horse!
Your weekend was a collection of highs and lows, I'm sorry about your friend, but great reminder. One of my favorite quotes:
“I will take the sun in my mouth
and leap into the ripe air
Alive
with closed eyes
to dash against darkness”
― E.E. Cummings

I put alot of trust in Tamara! I knew she wouldn't steer me wrong.. and put me on a renegade! It was a beautiful ride and that will be a memorable weekend, both the good and the bad. I love the quote.. had never heard it but definitely words to try to live by. thanks for sharing!

What a great experience! I'm glad you had a good ride- sounds like quite an adventure. I'm sorry to hear about your friend's loss.

So *that's* who that was riding with Tamara! Congrats on finishing the 50! Hopefully you'll be back next year. and sorry about your friend.
- The Equestrian Vagabond