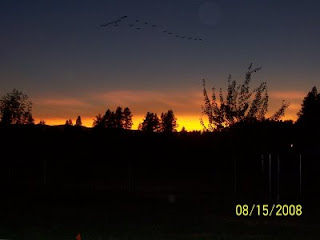 I arrived home just before dusk this evening. A undeniable bite in the air as arctic front is about to bear down upon us. The chance of snow with rain according to the weather forecast beginning tomorrow. We have been enjoying mild November weather so far.

I tossed the heals and blouse and changed into crummy jeans, a warm hat and gloves , and headed out to feed horses. We use round bales to feed from, simply because we have not been able to build a hay barn yet. Round bales , when tarped, seem to shed water much better than squares. We end up losing a lot less to mold this way. Typically people who feed rounds also use the feeders. We don’t have those either. Instead we fork off hay from the bale morning and night. Personally, I would prefer feeders but that’s one of those things that I haven’t convinced Tom of yet. He thinks there would be too much waste and Rebel and Roman would tend to attach themselves to it like woodticks.

I loaded up the ‘rickshaw” with enough for 5 generous hay piles. The sun had set but it was not quite dark. As I approached the gate, I was greeted by 4 galloping , frisky geldings, obviously feeling the change in weather as well.

There is no sweeter sound to my ears than that of thundering hooves, no greater joy than being able to see my horses run and play.

I paused and watched as Cassidy and Brego romped about, leaving me in awe with their effortless rollbacks and airs above ground. Rebel and Roman were more interested in the hay but they did get caught up in all the excitement and joined the other two for a run about the pasture at a high speed, down to the other end of the pasture, around the outside of the round corral, and back towards me. What a thrill to see 4 geldings running right at me, almost full speed!

I doled out the piles and nattered greetings to them all, a scratch or two here and there, as they sorted out which pile tasted the best and settled in for a long chilly night. It occurred to me that it’s the small things in my life that I am so thankful for. How many of us get to experience that of running horses, cheeks bitten by fresh crisp air and soft fuzzy muzzles? All things at this moment are just right .
Posted by Jonna at 7:09 PM