The perfection of life with a gun dog, like the perfection of an Autumn, is disturbing because you know, even as it begins, that it must end. Time bestows the gift and steals it in the process"
George Bird Evans
"An Affair With Grouse" 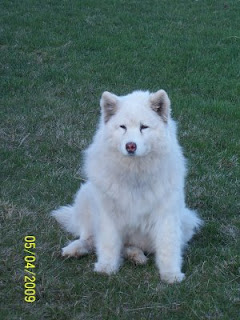 The quote above was sent to me by a friend and while Samoyeds aren’t a bird dog, the quote was truly fitting.

If anyone has ever had the opportunity to be around a Samoyed, you know they are the dog with the smile in their eyes.
At first glance, this story has little to do with my endurance endeavor but in many ways has everything to do with it. It's kind of taken the wind out of my sails of late with just about everything, including wanting to condition for endurance with Rebel. Sage was co captain during our rides. She was always right there with me, trotting along. I'll bounce back I am sure, but it may take me some time.

Love Mom, Dad, Morgan, Loki and most of all Munci.

I am so sorry for your loss of Sage. Always sad to lose one that was part of the family, I hope all the sweet memories of good times with Sage stay with you forever

I am so heartfelt sorry for your loss. For some of us our pets become our children (even if we already have some of those in two-legged form). Only two weeks since my Molly Brown was let go. I'm glad you were able to do that for Sage at home. I wish we'd have had that option, but we did not. Hugs lady.

Steph- lots of great memories for sure. We will cherish those forever.

EG- thanks for the hugs. Amazing how these 4 legged critters touch our lives. Hugs right back at ya for Molly.

I'm so sorry for your loss--I'm still playing catch-up with my regular blogs. I completely know how you feel, and you were very wise to take care of things before they got awful. Mammary tumors can grow into monsters in a remarkably short time, so you were very quick. There's still nothing worse than waiting for the vet to come in and end your friend's life, though. I've been there, I'll be there again, and it's not my favorite place.

Thanks- I was amazed at how aggressive in nature that tumor was and how painful it was as well. I have two more dogs and one other one is 14 and not doing the best. I hope for my husbands sake she will carry on a while yet.