I rolled into ride camp long before the chickens were awake Saturday morning to volunteer with the Blacktail Mountain Classic endurance ride. It was cold enough that I had dressed in 3 layers and was clutching a mug of steaming hot coffee. The fog that had blanketed the valley was now lifting and the temperature was dropping as the sun was coming up. The weather predictions were to be 86 degrees today, but it was cold early on and there was no telling what the weather could do. It had rained heavily all day Friday. I wasn't taking any chances and was prepared for a day of standing at the 3500 foot elevation with tempermental weather. 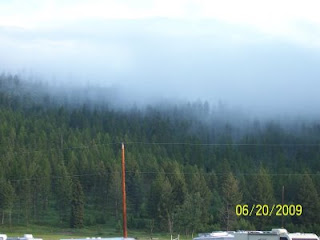 This ride wasthe first AERC sanctioned ride that has been held in this neck of the woods for quite some time. There were approximately 63 riders total that showed up. We were thrilled with the turn out. There were 32 of them scheduled to ride in today's 50 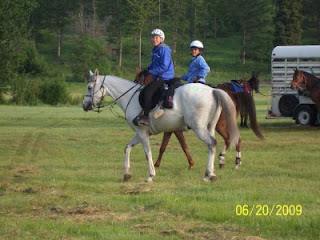 When I drove up at 6:00 a.m., horses and riders were already hustling about, a few last minute vet checks were completing and it was almost time for the 50 mile riders to head out.
The clock struck 7:00 a.m and it was time. The ride manager and all of us volunteers watched them head out at 7:00 a.m and as they left camp, everyone stayed mounted and safe. 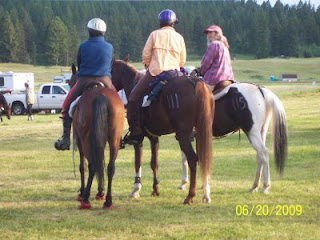 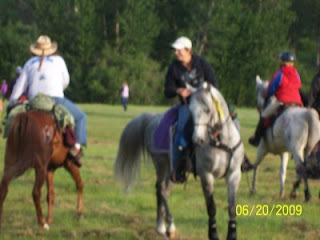 As soon as they were out of sight, it was showtime for me and the rest of the volunteers. We all crammed into Sherri’s truck including two vets, with a trailer in tow , with a mountain of supplies and crew bags riders had thrown in and headed up to where we would be posted for the first vet check out on the trail , approx at the half way point of the first 31 mile loop they were to complete. The first loop for the 50 was going to be a challenging ride as the trail is a steady uphill climb that is deceiving.

Within about an hour of getting set up at the vet check, watches synchronized, clip boards and stethoscope in hand, the first riders started trickling in for their first P&R and vet check. Pretty soon the trickle of horses was turning into a full open faucet and they came in drove. We were scrambling to get everyone timed in , pulsed down, vetted through and back out. 4 hours later, all 32 of the riders in the 50 made their first check point successfully and we headed back down to ride camp to finish helping out the other volunteers handling the limited distance riders that were riding a different loop.

The riders , after leaving us at the vet check, had to head back to camp to complete the first 31 mile loop, vet through and then complete two more 10 mile loops. As the riders completed and were getting ready for the second loop, rumors were already going around that a few riders had already been pulled . the weather was cool and couldn’t have been more perfect for a ride so it wasn’t a heat factor. By the time the riders were completing their second loop, there were 6 pulls.Atleast one, I knew for sure, was a rider option. It seemed that riders were falling into the well known trap of the terrain. The majority of the trails that this ride was held on are wide open and appear easy so many riders were moving along quickly , cantering much of the trail going out…but it’s a steady lunch eating climb that will catch up to a horse. And it was …. 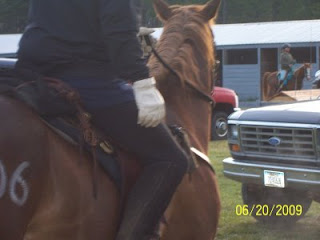 I stayed and checked in the first 13 riders of the 50 but it was approaching 6:00 p.m and I had to get home to feed my own horses. There were still several riders still out that hadn’t come in but I had to head out and pass my post off to someone else.

This was the first true AERC ride I had volunteered at . We had a great turn out with riders from Oregon, Idaho, Washington, and even Canada. I really enjoyed seeing how different people set their trailers up and taking a peek at the varying gear, tack, etc. Sunday was another 25 and 50 but I was unable to make it , being father’s day and all.

Hopefully we will host the ride again next year and I can ride it instead of volunteering!!
Posted by Jonna at 7:19 PM