Meet April.... she is the newest , unplanned addition to our family: 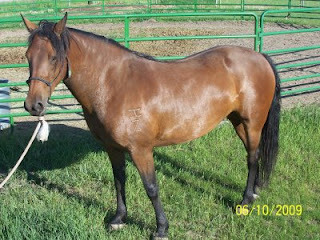 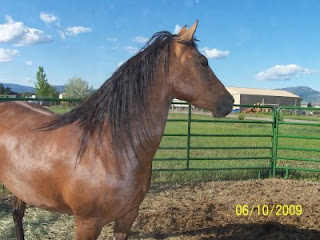 April has found a new home here at Acer Farm. Yes, I am apparently rule breaker. Sometimes you have no choice.
Several years ago , we got rid of all of the mares we had. It was strictly for ease of management purposes, 4 geldings and a stallion was really quite easy. I have long contributed to the idea that, in most cases, I would much rather deal with a stallion than a mare.

I still would but I did say in most cases...

Over the last couple of weeks, April has found a way to say alot to me. She seems to fall into the other category outsided of "most cases". She was supposed to go to Oregon but someone fell in love with her. (I am not mentioning names here) No she isn't a Barb, she is a Lippitt Morgan and has some bloodlines that are pretty hard to find in the Lippitt Morgan world but I don't much care about all that registry , paper thing. I just like her, alot....

She is barely green broke and judging from the two test flight round pen sessions we had last week, we have lots of work to do but she is a quick study and I see some great potential in her as far as endurance.

My future endurance goals have been to have two horses going at the same time. That would allow me a back up horse in case one gets sick or lame and as a bonus, in a couple years, a second horse would allow me the opportunity to do multi days. Rebel, as most of you know was my back up plan but that has recently back fired a bit. Rebel has developed some soreness in his right shoulder. Sometimes he is sound and sometimes he is lame. (I'll save that for another post) As a result, he might not be able to endure the conditioning a 25 or a 50 would require. So coming full circle, that leads me back to April. So there 's that.

JB is healing up from his castration and that all went very well. I can begin riding him again by the weekend. In the meantime, April and I will be getting to know each other a bit more.
Posted by Jonna at 10:50 AM

Congratulations on the new addition! I had a feeling she was going to be staying :)
Looking forward to reading about all the training you do with her.

yep, those big doe eyes had me...Can't wait to get her weight down far enough to ride her. I will definitely be posting about our progress.

Thanks for the all the compliments on April- she's kind of a tank at the moment but she has already dropped about 70 pounds (according to a weight tape) just by getting her off full time lush pasture! She is starting to feel better to judging from the airs above ground she has been displaying!