You met Maggie last June. I did this post when she arrived ( previously known as April) arrived at Acer Farm. She was here strictly for one reason; , that was to be bred toJB. The breeding never occurred because an unexpected offer lay on the table ; April's owner at the time, due to health issues, said he would like me to have her, but if I couldn't take her, she was headed to Oregon, with what sounded like a questionable future. And so, over dinner, we made the deal and the Doe eyed Diva stayed put. I had no idea , really , at the time if she would really do much in the way of endurance but something about her peaked my curiousity..... The first order of business however, was to get her dry lotted. She was terribly overweight and on the verge of founder. She was herd bound with her damn, who she arrived with. She was all attitude... and I liked it....

Over the next several months, we got to know each other during round pen or arena sessions, working on the basics. We made leaps and bounds in the bonding process because she hated being confined to her pen and seemed to looked forward to the distraction of our sessions.

So, 8 months later I am seeing a slimmer, more mannerly version of the same horse out in the pasture and we have started some very initial spring training. In the last week or so I have pulled her out of the pasture, done a cursory brushing, slapped on JB’s older Epics and took her along with me and my dog for a walk. May as well kill two birds with one stone, right?

Normally, my preferred choice of getting a colt out and about is to pony them, but I am a total chicken about the footing right now. It’s still slick in many areas along the roads I use for conditioning. No sense putting me and two horses at risk. So we walk and sometimes we stop, we look, we carry on..

Hand walking certainly has it’s benefits. It's like a test drive, get a feel for things and play it on the safe side. Since I only got the chance to take her out on the trail once last summer and she had a buddy along, I wasn't sure how she would handle leaving the herd, deal with passing vehicles, any of the other distractions we might happen upon. I wanted to set things up so Maggie could begin to look to me for confidence. Hand walking seems to be a great way to do that.

It also gives me opportunity to work with her on leading, manners on the lead and getting her to respond to voice cues. We pass the miles , when we are n't stopping to gawk at something, working on whoa, walk, walk up, trot. It's a good thing she doesn't have to chew gum and walk at the same time because she doesn't seem to be able to multi task yet!

The trotting in hand sessions have been kind of entertaining. She has a nice little jog that I can easily keep up with for some time on my own two legs, a job that I can picture riding along to for miles on end; but she tends to get caught up in the moment and shifts down a gear , or two , and gets into her big Morgan road trot(that thankfully isn’t totally developed). I have to stop her because I can’t keep up. Obvioulsy Stupidly, I have tried, atleast given it my best shot but the short legs don't stand a chance. She just kicks it down again and goes faster... (I think she likes to race!) Not sure where her final gear might be, but I suspect as she gets in better shape, she might find a few more... good for later, bad for now...

On our last walkabout, during one of these trotting sessions, it hit me like wall. I suddenly realized what it was.... the thing that I saw in her early on.. but couldn't quite put my finger on...her power. It resonates off of her, travels down the lead line and hits me like a bolt of lightening. This I think , will make a fine endurance mount.

As for JB, no I haven't forgotten him. His turn will be this weekend.. He's healthy, strong and has been vibrating for weeks. It's time to rechannel that energy into something productive. If he comes out of spring at all like he did last year, I might need to find my Hi Ho Silver Costume first. 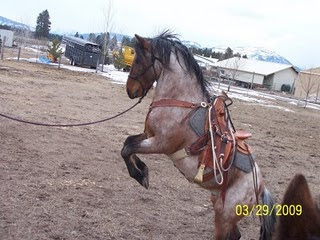 I really enjoyed this post. There's nothing that gets me excited like a endurance prospect and the early preperation of an endurance mount!

glad to hear the saddle is still working out for you.

Thanks Mel...I am just struggling with the time thing since I am tryingto balance school,work , life and two horses to condition...

I LOVE the saddle!! My dressage instructor loves it too!