Our weather has been .. well down right southern California like. We are breaking heat records left and right . April May and June have been the driest we have have seen in years. Forest fires  have already begun and there is no rain in the forecast. Most areas have restrictions for  campfires and fireworks, which doesn't hurt my feelings ( on the fireworks)

I attended an Event Derby last weekend. On the hottest day of the year SO FAR ( we set records in the temperature department)Plus, it was yet another  FIRST. First time attempting anything resembling an actual cross country course. Logs, ditches, water jumps.. and then the occasional regular standard fence thrown in for good measure. Again, it was schooling level so low pressure,  (well it was supposed to be but I was nervous as a long tailed cat in a room full of rocking chairs!)   We made it around the course with no major issues but it felt really clumsy and awkward. Brego hesitated at one of the log jumps, but with encouragement got over it in a less than graceful way. 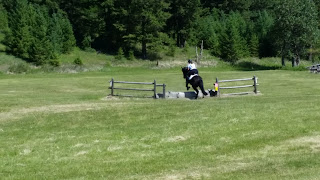 Ofcourse, because I was nervous, I got too far forward on most of my approaches .. ughhh...I know better.. really but I don't even realize I am doing it half the time.. SO maddening!!

The good news was that in spite of my forward position, Brego wasn't rushy, he was actually lazy so it was just weird. He normally requires  alot "Whoa dammit"  moments between fences but not this day. Nonetheless , we made it around without any major issues but I wasn't happy with how I felt  about the course. Had it been cooler, I would have hung around until the jumping was done and then gone out to school it some more with my trainers help but by noon, it was already 95 degrees. I was drenched and wanted to get to the lake for a swim.


After the show, we got Brego home and hosed off, which he seemed to thoroughly enjoy and then was adequately swabbed with multiple layers of bug spray, swat and wound cream for the bug bites that had turned into sores. The horses all looked so miserable and hot,  that I decided they all might appreciate a cool hosing off before we left for cool water ourselves.

We got lucky, really lucky. I could easily be writing that I have a dead horse.

Otto, in his rambunctious two year old ways, (please let us survive this year!) was running around and apparently ran into or jumped up and came down upon one of the  metal T posts in the pasture that fences off the archery backstop and target holder thingy.. (I know, go ahead and gasp as images of an impaled horse run across your mind) .

LUCKILY, the T posts have plastic safety covers on them,  for just this reason.  I hate that we have these metal posts as some of our fence posts but replacing all the posts is an ongoing project. He still did a number on himself, but had it not been covered, he would have impaled himself.

Instead, Otto ended up with a nasty scrape and a fair amount of soft tissue trauma. He also managed to cut his lower gum. I was watching him run around and play , as usual , in the pasture and looked away for just a minute to get through the gate and over to the corrals to fill water tanks. By the time I got there, Otto  came over to me with a mouthful of blood and blood running down his chest as if to say as if to say..  "Um.. I did something dumb and I have a boo boo" . I missed seeing the whole thing by seconds I think.  One minute he was fine, another, injured.. sigh


I examined him, cleaned it up and he happily let me squirt water in his mouth which must have felt good on whatever his mouth injury was,  but he wouldn't let me get a good look in there. I could kind of see that there was definitely a good cut below his teeth on the bottom jaw. I called the after hours number for our vet, because it was , ofcourse , afterhours. After a long series of questions and answers,  we determined that he was probably not mortally injured based on what I could see and feel. There was no actual puncture wound, just a really bad scrape, which almost looked more like a rope burn. The plan was to administer oral banamine, hose the wounds a couple times a day , keep ointment on them and watch for changes, especially watch his eating/drinking habits with the mouth wound. We walked out to the pasture and we did find one of the posts was pushed over , leaning to one side. That had to be the one he did it on.

He developed alot of swelling over the next couple of days on the chest but he was eating and drinking and moving fine.  By Tuesday, however his chest became hot to the touch and the swelling was increasing and spreading over to the other side.  He didn't have a temp but he acted like he felt terrible. I decided to take him in to be looked at.  The vet examined him , debrided the wound and basically determined he was fine, other than there was alot of  soft tissue trauma. There was no sign of infection or foreign objects.  I got a tube of Ascend Silver Sulfadiazine (best wound cream in the world!)  and headed back home.  Like I said, we got lucky.

Like magic by the day after the vet appt, the swelling was significantly down and the lacerations were looking much better. They really didn't do much so I am not sure if it was the cream ,  the debriding or just coincidence that things look significant better. I am opting that the cream did it. That stuff is amazing.
Here is how it looks now.. the long center one is where he came down on the post, we suspect. No idea how the one occurred on the point of the shoulder. 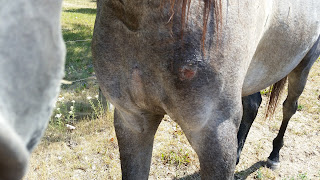 The injury at the point of shoulder is much more bothersome to him. The vet was initially concerned most on this one because of the growth plate there. However,  Otto hasn't been lame at all so likely it was just more soft tissue damage. Maybe more tender because it's bone mostly there.

Lets hope this is the first and last of any major incidents..

Great job at the event, but arghhhh, don't scare us Otto! I'm glad he seemed to escape his shenanigans largely unscathed, that could have been very bad. My stable also has t-posts, but they're all capped with hotwire caps. I still worry a bit, because, as Otto proved, they can find anything to try and kill themselves on! Hope he heals quickly.

I'm so glad he is OK! I hate t-posts too, but wood posts have gotten really expensive, its hard to replace them all.

Glad you had a good event, looks like fun!

With a few key strokes, people from all over the world can find the comforts of home in the Derby City. If you really want fun and feel relax then book a Lousivlle Home Rental

Well done! great job. You can also read aboutSterile Water to get some medical solutions with Bacteriostatic Water Australia

I could not have closed on my first home without Mr, Benjamin Lee ! Benjamin and his team went above and beyond for me on this transaction. He handled my very tight turn around time with ease and was always available for me when I had questions (and I had plenty), even when he was away from the office, which I greatly appreciated! He and his team handled many last-minute scrambles with the seller and worked tirelessly to make sure that I could close before my lease (and my down payment assistance, for that matter) expired. Mr Benjamin is an incredibly knowledgeable Loan Officer, courteous, and patient. I went through a couple offers on properties before my final purchase and Benjamin was there to help with each one, often coordinating with my agent behind the scenes. I felt supported throughout the entire process. Thanks to Benjamin and the tireless efforts of his team, I am now a proud homeowner! I would encourage you to consider Benjamin Briel Lee for any kind of loan.Mr, Benjamin Lee Contact informations.via WhatsApp +1-989-394-3740  Email- 247officedept@gmail.com.