We survived our first Dressage Test

So this weekend , was my third schooling show with Brego. I almost can't believe it myself. I never would have imagined getting myself in the show arena this much but  I think we are finally getting the hang of it .   I was way less nervous this time around and generally felt better about going than I have for the last two. This time around we signed up for dressage, this was yet another one of those firsts.

For the last few weeks,  we practiced a very simple Intro level test in preparation. I wanted  easy and attainable and nothing that required a canter.  (you all know the issues here by now)

Basically Intro is to be ridden at walk trot only, no cantering involved.  Movement include a free walk,  medium walk, riding trot and 20 meter circles. The horse and rider should be adequate with effective aids in transitions, developing bend and relaxation.
Each movement is scored on a 0-10 rating - 0 being Not executed and 10 being Excellent.  The rule of thumb is that you don't move up a level in dressage until your scoring a 6 in all areas consistently.

The next level is Training level and includes canter and sitting trot so that was out.

Side note ...I always struggle with finding the balance between challenging myself enough and taking the easy known happy path that I know I can be successful at. If you let me, I will always take the happy path (which is why I have a trainer , otherwise I never would have entered a show !)  because I want to avoid a total mess up and the ensuring embarrassment. Personality flaw I guess.

At the same time, it was pretty obvious watching some of the other competitors in attendance that  they had "over challenged" their skill levels  with the tests they chose to ride and I was thankful to be on the  opposite side of that problem.

We rode our test and aside from a few little glitches with Brego getting above the bit and a little unsteady in his pace,  I could not have been more pleased with his performance. Yes, it was simple, no, it was nothing to write home about ,  but with Brego, that "being steady" things   is a huge thing for him.  He likes to go slow one minute or suck back sort of, then surge ahead or just have the accelerator on full throttle. In the last few weeks, we have finally been making some progress on steadying up his trot .

My highest scores were 8's  and surprisingly enough, it was on the 20 meter circles.I know my geometry was off, but because he had correct bend we scored well. All that time doing circles and lateral flexion paid off.  All of my other scores were 6, 6.5 or 7. I had one 7.5 on the Collective Remarks section on his impulsion and forward. No surprise there. 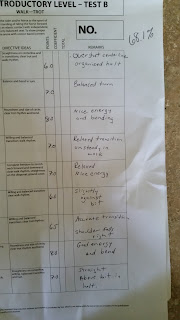 My highest scores were 8's  and surprisingly enough, it was on the 20 meter circles.I know my geometry was way off, but because Bego had correct bend we scored well. All that time doing circles and lateral flexion paid off I guess. All of my other scores were 6, 6.5 or 7. I had one 7.5 on the Collective Remarks section on his impulsion and forward (second page not pictured) No surprise there. As for the mark on my position, (not pictured again),  I tip left and tip forward. It's my very bad habit and I fight it every step of the way when I ride. Someday, I will learn how to truly sit upright.

I think these remarks are just about spot on with what we have been working on in my lessons (and at home) so it was nice to have a fresh set of eyes and feedback. It was confirming at the very least.

The overall impression of this test is that this is generally a horse/rider that are off to a solid start and could /should be looking at moving up to Training Level very soon. We will have to see about that! The world of being an Adult Amateur making a re-entrance into the show world is full of highs and lows. This day was

Jumping-There were very few people jumping. I did the crossrails class once again (safety zone) and felt very relaxed about it. Brego got a little speedy but he jumped his round clean so we were in the jump off. We were the only ones that jumped clean and did it the fastest (even though I thought he was going at a reasonable pace for him) so we won our jumping class. We were even able to canter several and keep it to a controllable canter. All those days of cantering ground poles might be sinking in a bit!


Overall,  I was quite happy with Brego. He listened and was really good. One of the things that stood out to me the most is that there were several "horse"  mishaps  with horses hauling back from their trailers and getting loose, running around the other trailers. It's a dangerous situation but my horse just looked, and then went right back to eating his hay. Not a care about the other nonsense that was going on.  Having a good minded horse that you have done your homework (groundwork) with....priceless!

So the world of being an Adult Amateur making a re-entrance into the show world is full of highs and lows. This day was definitely a high and maybe we will be ready for sanctioned show by end of season. You just never know!
Posted by Jonna at 1:54 PM

congrats! With such good scores, guess you have to step up to the next level! You guys both looks good (as for the tipping forward, we all do something, and it is hard to retrain years of body posture, so don't be too hard on yourself!)