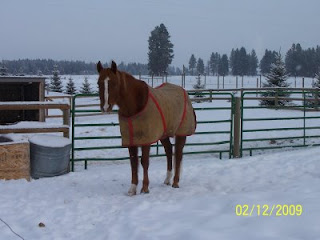 It all started with a simple trip to the vet on Tuesday to have Rebels sheath cleaned. He had developed some swelling and with the temperature being on the cold side, I didn’t want him to suffer through me trying to clean him up without the use of a warm room. Little did I know that 24 hours later, when I arrived home from work, we would be rushing back to the vet with him .

Over the last 14 years of owning Rebe , I think he was sick once. Rebel is my tough guy horse and doesn't typically have any health issues. I knew when he came trotting up to the fence with a look of worry on his face something was off. When I threw feed at him and the other horses and he stood away from the pile pawing with his nose on the ground, I was pretty sure I knew what was going on. Rebel never turns away food. Seeing the "glazed over in pain" look in his eyes confirmed my suspicions.
When it comes to colic, Tom calls me the pro. I don't know if that's a good thing because unfortunately the only way to get good at recognizing colic typically only happens when you have had past bad experience.
I had a TB mare that I dealt with colic on a routine basis, atleast 3 times a year or more. I even put the mare through surgery, only to find out when the vet opened her up, that at some point in time, some previous owner had already put this mare through atleast one other colic surgery. Regardless, she came out of the surgery relatively well and I nursed her back to health , only to lose her to colic in the long run anyways. For four years I dealt with the ups and downs of a horse prone to colic. You never rest when you have a horse like that and you are always worried. Over the years, I got pretty good at picking up on the slightest cue that a colicky horse may give off. Granted , each horse can display their symptoms different but there is a look that horses get in their eye that is telling.

With Rebel, off his feed , pawing at the ground and stretching is enough for me…Having been gone all day , I didn’t know how long he may have been having trouble. Tom was home earlier in the day and noticed he was laying down but so were the other horses. It wasn’t really a red flag for him. At the same time , Rebel doesn’t usually lay down much. he is the one that stands guard typically when the other lay down.

It had been several years that I have had to deal with a colicky horse but just the same, my mind kicked into gear the well known routine. I grabbed the stethoscope and starting listening for gut sounds. Pretty quiet all the way around. This isn’t good. Rebel continuedd to stretch and paw at the ground. I grabbed his halter and started walking him. In the meantime, Tom put a call into the vet emergency response line and within about a half hour, we were get ting the truck and trailer hooked up to head to the vet.

Thanks to Toms excellent ability to back a trailer into a tight spot, I had about a 3 foot patch of ground that wasn't a sheet of ice, that I could safely load Rebel into the trailer from. The next challenge was the roads. The snow was coming down pretty good and the roads were slicker than snail snot. To top it off, our trailer lights decided to not work consistently on the trip there, (note to self, new plug in for the trailer) so it looked like we had our flashers on, which was fine. Kinda looked like a horse ambulance winding our way up the hills! We made it there safely, only barely missing a herd of deer who decided to have a rendezvous in the middle of the icey roads on a blind corner.. STUPID DEER! For a moment, I thought that we were going to be loading up a wounded deer to bring to the vet as well but we lucked out and they were all able to scramble out of the way in just a moments time.

To my delight, when we arrived, Rebel had passed two good sized piles of manure, a bit on the dry side but manure nonetheless. That meant there was some movement in his gut. A small sigh of relief. A trailer ride will almost always help a colicky horse, unless you have a twisted gut on your hands.

We unloaded him and the initial rectal exam revealed no indication of a twist and much more dry manure in his colon. Gut sounds were quiet in the upper quadrants but improved in the lower from when I had listened before. We gave him a dose of banamine for some pain relief from the obvious spasms he was having and tubed him with warm water in his gut to get some added motility. His temp and pulse were within normal range.. second sign of relief . He also didn't seem to be dehydrated and his CRT was good. Then, we waited... and waited...
We waited to see if the tubing was going to make any changes and while we waited; we discussed what happened. As with any colic, the question of why? What changed? What caused this. As most of you know, the person that could answer that question in regards to colic would be a rich person.
I was pretty certain that this episode of colic was not his diet. Could he have gotten some moldy hay? Doubtful and he shares hay with 3 other horses. They all play musical hay piles and no one else had any symptoms..I felt pretty positive that I could rule out feed as a culprit. He does not receive grain.
Since his manure was relatively dry, that indicated lack of water. The vet mentioned that sometimes when a horse has been given Ace as a tranquilizer, (from his sheath cleaning) they don’t always drink enough when they are coming out of it. That could have been it. Not enough water. Will I ever know for sure? probably not ; but when nothing else changed and I rule out everything that is left, it seemed like the lack of water consumption was the most likely explanation. I also double checked the tank heaters to make sure they were sending off a trickle charge, keeping the horses from drinking… the heaters were fine.
20 minutes after tubing him with about 1 gallon of water, I heard a belly rumble from across the room. AHA!! the water was starting to move things . Then Rebel let out a big groan. Vet said he noticed when he put the tube into his stomach, there was quite a bit of gas so it was likely that Rebel might feel some discomfort over the next several hours as the gas worked through his intestine. We checked vitals once more and all seemed normal. We decided we could probably take him home. He looked a lot brighter and it sounded like the gut was moving again.

I knew I might be in for a long night. When we got him home, we isolated him in a corral by himself so I could watch for manure and water intake. Every couple of hours I was up, keeping a watchful eye. At one point I became concerned because he was down again and was laying flat out. I could also tell had been rolling judging from the snow on the blanket I had on him. The vet said he would probably display some signs of ongoing discomfort because of the gas and spasms . I was glad he mentioned this because I almost called again but decided to watch for a bit first. Luckily, after about 10 minutes of being down, Rebel got up and started picking through the snow looking for leftover hay. I wouldn’t be able to feed him until morning but this was a good sign.

So far, he hasn't laid down again, hasn't rolled and hasn't stretched out or pawed at the ground. He ate a small helping of hay and at 9:00 this morning he passed a small pile of dry manure. Still no interest in water however. I called the vet and she did not want me to give him any soaked beet pulp, which I was surprised by. Most of the morning he has been munching on his hay but certainly doesn't have the gusto of his regular appetite. Nonetheless he is eating. His gut sounds appear to be active. All good signs that we are headed in the right direction.

So, today will be spent watching him and making sure he doesn't slip backwards. I may opt to give the beet pulp regardless if he doesn't drink soon. That will atleast keep some water in the gut. With my mare that I mentioned earlier, as soon as she was interested in eating after an episode of colic, the vet wanted her to have beet pulp.

Sometimes, with colic, it can seem like all systems are go and then right before your eyes, they can take a downward spiral in a heartbeat. Keep your fingers crossed for us!! And I will keep you posted on his progress.
Posted by Jonna at 10:09 AM

Whew! It's great you noticed right away--it's so important to know your horses and be able to spot trouble immediately! It sounds like Rebel will make it through without any trouble--it's always a very good sign when the HR/RR isn't elevated. And yay for hubby being able to back a trailer!