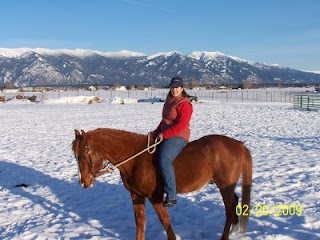 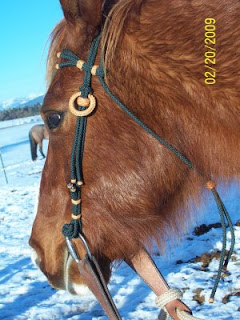 What's this??? Read below for more details...

I have started riding around our pasture and that will have to suffice until I get boots figured out for horses, (hopefully next week). A half hour or 40 minutes of walking and trotting is better than nothing. It is driving me a bit crazy but there isn't much I can do , so instead I am working down the list of various to do's prior to the season. One of those things included organizing tack, getting new halters, reorganizing bridle set ups and cleaning tack to help pass the time and keep me focused on something productive.
Tom makes all of our rope halters and is quite talented with knot tying. Since all of the halters we are currently using are old and looking kind of ratty, we decided to finally pull out the reems of rope we have been collecting for this very occasion. Now, each horse has thier own color coordinated halter. Pictured below is Cassidy's halter with an additional picture of the fancier know he tied one end off with, known as a Turk's head. 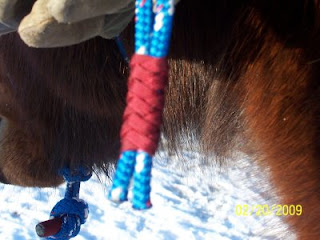 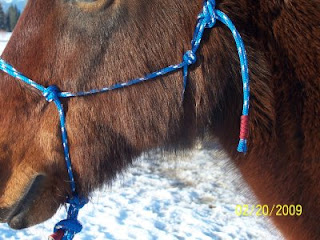 In addition to tying his own halters, Tom also picked up learning how to make his own bridles out of rope as well. They are really nice and lightweight, and better yet, I can throw them in the washing machine and they clean up very well. There is no hardware on these, just rope and leather. I know that the Beta bridles and gear are pretty popular but since I like to be a bit different and I already these anyways, I thought they might be useful for endurance riding with a bit of a modification. These are a bit fancier and are fashioned after a more traditional western look , typically having the mecate rein attached.

Since I plan to condition and participate in a couple of rides with Rebel this season, I had Tom modify by removing the Mecate rein attachment. The additional Mecate rein is nice but adds another 10 feet of rope to manage. I seem to be rope challenged and end up tangling myself in most cases! Without the extra rope, it makes it much more user friendly , atleast for me! You can see in the photo that there is some hand braiding on the rings on the cheek pieces . This is kangarood lace that Tom hand plated. Cassidy's is white with black and Rebel's is green. I think Rebel looks rather dashing with the kangaroo lace that matches his hair! See Rebel's photo at the top of this post. 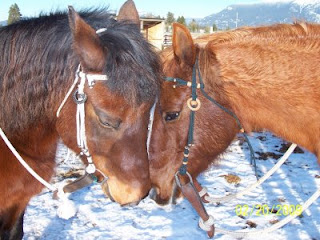 JB also has one of these in black and red which looks really flashy on him but we save that for special occasions! JB's endurance bridle is a simple leather headstall with rope reins and slobber straps.

Okay how much does Tom charge to make bridles reins and ropes?

I don't know, he's never really tried to market them !!

In todays economy Cottage Enterpirzes are going to be huge! Be on top and get your marketing down. You have a product!

I will pass that on to him for sure. He will appreciate it...