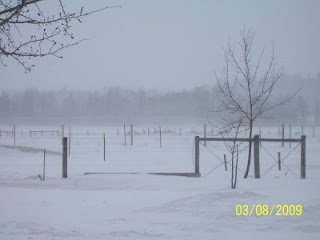 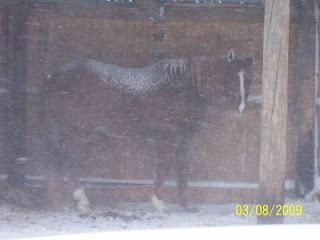 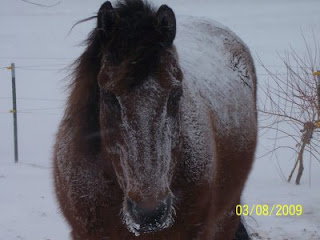 Brrrrrrrr... Don't these photos just make you shiver??
Over the weekend, we suffered through an “arctic event” that blasted the area. As a result, there were no “Photo Shoot” opportunities to get pics of JB’s feet like I had hoped.
Have you ever tried to feed off round bales with a fork while getting through gates and dodging grumpy,hungry horses with 35- 40 mph winds? Well if not, than I don’t suggest it. It had me cursing like a sailor!
The cold blast was supposed to only last only through Saturday evening and let up by yesterday but this morning, the winds continue to rip and tear at anything in its path. Tonight, we are the lucky recipients of yet another arctic air weather pattern to hit the area with wind chills reaching -20 to -30. Is Al Gore scheduled to appear somewhere in the area to talk about Global Warning or something?? Hahahaha!! Seems everytime he is scduled to speak , his meeting gets cancelled to due to record cold temps… The big man clearly has a sense of humor! Ok- enough
Our morning attempt to get to work, aleady behind schedule due to the extra time it took to feed in the hellacious wind, was eventful since all the east west roads were drifted shut. A few braves souls also attempting to get to work the “back way” had attempted the usual bust through the drifts and pray you make it out on the other side without landing in the ditch maneuver (since the plows don’t always show up until later). Unfortunately, this time, it was a bit deeper than they had bargained for and they found themselves stuck. I turned around and had to try 3 different routes , all of which had snow drifts that had captured other victims. I finally back tracked and had to get out onto the main highway, although I was tempted to just go back home and go back to bed. By the time I had gotten out to the highway, it was 20 after and the 8:00 traffic was full on. Oh Joy. Usually I am at work by 7:00 a.m! Here are some photos of what our place looked like over the weekend.

I thought we had it bad in Chicago area with torrential rains for 2 and a half days straight! You sure beat that with arctic blasts!