I can't believe it! Duncan's issue with cracked pads last winter has reared it's ugly head again! I really thought it was a one time deal ..

For those of you that don't know, Duncan is the cutest dog in the world.. He's my Borgi, the love of my life, can- do- nothing -wrong, walks on water- dog in our household.
(ok he's actually very naughty at times but he is too cute for me to be mad at him for very long)

Last winter, Duncan's pads started cracking from going out on the snow and ice. Not completely unusual for dogs in the Northwest.
Duncan , Xena and I take walks most days and when we  can't , (due to my work schedule) I will at the very least spend a few minutes throwing the ball , or,  if all else fails, he  always has the option to do his other favorite activity, which involves him chasing the horse along the fence line. (make no mistake, the horses lure him into this game!)

** sidenote-  I really need to address this bad habit the dogs have gotten into,  but I am afraid it's going to require a training collar, actually two, one for him and one for Xena, the German Shepard, which I don't currently have.

As you can imagine, all of these activities worsen the paw cracking. But he's an active dog. If we can't keep him active during the day, my house will be turned upside down at night with his boundless energy.

Last winter, we went through the gamut of finding ways to protect and eventually heal his pads without limiting his activities. We started out putting antibiotic cream on his pads and wrapping them at night with vet wrap which worked for two nights until he decided he was not liking it and chewed them off. His paws got so sore, he would barely let us handle them, which was creating it's own set of challenges. Ideally, if I could get them wrapped and leave them wrapped for a few days that was best. We started lathering his paws in vaseline and special paw cream , wrapping them with vet wrap , Koflex, and putting the "cone of shame" on so he would leave his wraps alone. It sort of worked,  but  he was still able to get at part of his paws and rip things up so that when he went outside , the inside of the wraps were getting wet. Kinda defeats the purpose.

I found these, which looked like they would do the trick. and they did...for about 20 minutes. They ripped apart in short order.  The other down side was in the snow and ice, they were like skiies for him. They slipped and he was doing the splits. The fit wasn't great either,  they were either too tight at the top and after about 20 minutes, would become uncomfortable for him, or they were too loose.. Fail attempt #2... ( atleast they were colorful) 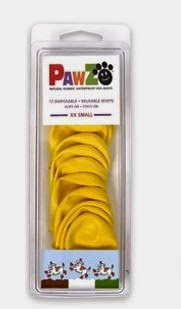 I went back to the pet store, once again, to look for another option and return the paw condoms. I brought home two different brands of boots , both of which were "guaranteed" to stay on. I was suspect but desperation was setting in. For both sets, we struggled to get them on for 10 minutes, let him out , and within 4 nanoseconds, the boots went sailing through the air as he ran through the snow.

In the long run we went back to wrapping with Koflex and vet wrap and got a different cone of shame that was actually an inflatable collar that worked a little  better but I was still rewrapping his feet every other day or so. We also had to put him on antibiotics because he developed a secondary infection as a result . Long story short, my baby boy Duncan was a sad case last winter. and now, it looks like we are starting all over..

I am now working on trying some different boots. I ran across a cross country skiier last winter who had these boots on his Golden. I asked him how well they were holding up and staying on and he said he has been pleasantly surprised.. but warned they weren't cheap.. I guess not. They are the Cabela's brand and come with a steep price.

Then I found these. They are called Trail Tracker , made by Doggles. What I really like about this set is how high they come up. Duncan doesn't have long legs but the upper pad, called the Carpal pad I think, splits open because of the cracks. Its rather painful I imagine.


These boots are also at a much better price point. I went to order but , ofcourse they are sold out in his size..

Back to square one, the quest continues or we hope the Trail Trackers come in soon.

Anyone have any recommendations? I would rather not begin the vet wrap fiasco again!

I would suggest looking at any of the websites that supply dog mushers. Many of their dogs have similar problems at the beginning.

I've ordered from all three companies but there are many more out there.

Thanks for the links. I did wonder how the mushers get their boots to stay on and knew there were probably other surces. This weekend we tried out a pair I found at Cabela's that were not the super pricey ones from the post. They actually seemed to work pretty well, even tested them out on the trail. They mostly stayed on but I think he needs the small because there is just a little too much room in the paw area for him.

I am going to look into these other links you provided as well.