It's only Tuesday but this week has been one for the books. I watched several colleages and friends be escorted out the office doors due to a reduction in force. It was something we all knew was coming but never suspected the employer was going to handle it how they did. Corporate America is not always a nice place. For months we were all on pins and needles wondering who would be cut and the people they chose , in many cases, made poor business sense.. but then again, I don't run the business. If I did, I certainly wouldn't do the things they do. Now that the worst of it is over, those of us left have a sense of relief that it wasn't any of us but at the same time that feeling of relief is overshadowed by the sense of loss. It's been a hard week.However,  life continues and things need done at house and farm. Home/farm ownership is a constant process of change as well. Ongoing upkeep, reassessing use of land, corrals and herd managment. The big "farm" news is that Grace is going on to a new home to be a momma again.
Remember when she came home  from Texas? I posted here about it. Well, she is moving on again. We aren't sure if it's permanent move at this point, but for the time being, she is going to a friends ranch east of the mountains to be bred. She is not sound to ride more than light pleasure riding due to the mishap with JB, ( which ofcourse nearly killed JB and ended his endurance career )but also caused her some issues as well. In the mishap, she broke the tip of her coffin bone.  The good news is she still has some worth as a broodmare. She has some pretty hard to find Lippitt Bloodlines that just shouldn't be wasted and we have no intentions of breeding anymore. Tom had several foals out of her years ago but we are done with that phase of our horse life! So that's that. Moving on...

The springtime ritual of dragging the pasture to bust up the turds is done and the pasture looks brown but neat. Now we wait for the green stuff to start sprouting. As mentioned here,the trailer is scheduled to go in to have the axles flipped at the end of the month (soonest we could get it in) and it won't be as pricey as we originally thought. That is rarely the case these days. Thanks ya'll for the info on the product that can be a protective coating. We are looking into it..

The truck goes in for a new windshield  and the trailer gets new tires next week. (Planning to hit the raod and head to Idaho in July for a pioneer ride!)

Today, we were given the good news that  the water softener system finally choked to it's final death so that was replaced  and last but not least, the fenced yard project is well underway.

With any luck ,Xena won't get any ideas and we won't have this situation..! 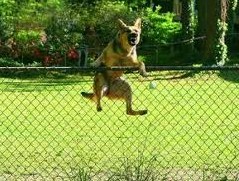 PS:I have also been working Maggie on the lunge a bit this week. It's going well but the canter is in need of some work. In all the years I have lunged horses, I have not yet seen a horse react quite like she does when she canters. It's almost panic as near as I can tell. I will be doing a post on it soon. Stay tuned..