My not so little longed legged wonder is turning into a bit of a monster. The weather has cooled and he is feeling quite full of himself. At times, the studliness shines through and he acts like he wants to nip.

His attempts are half hearted but enough to keep me on my toes. The key is to not let him think its a game, which can happen quickly with studs. They go to nip, you get after them. Ideally, blocking the attempt just as the thought is crossing his mind is ideal. My timing is sometimes off but so far, he seems to respond with one strong correction and then he's done. It's just a playful thing but it's one of those habits that can become a big thing quickly. Just something to be aware of and not make a huge deal out of it.

He will occasionally do a "drive- by" with Cassidy , trying to establish himself or get Cassidy engaged in a game of some kind. Cassidy still looks at him mostly in disgust  or just gets after him and then Otto goes looking for something else to entertain himself with. Attention span of a nat..

If the dogs are in the back yard, he will purposely run back and forth the length of the fence , bucking, kicking, arched neck, thinking he is really something.
Ofcourse the dogs go nuts and play right into his "hooves" and run along side , barking their heads off.. then Otto goes blasting away.... only to make a circle and do it all again.. Meanwhile, I am trying to work in the house.. (how can I be expected to work in these conditions????)

Occasionally Otto does let Cassidy get out of site , sort of, but not for long. We took Cassidy last weekend for a trail ride and that left Otto alone for the first time. Well , he wasn't really alone  alone, because he was across the fence from the other horses but he was without his passifier for the first time since we had put them together. Its rare that a 1.5 year old colt isn't slightly insecure about being left alone. JB was the exception to that rule. Before we pulled out with the trailer, Otto took one big victory lap around the pasture and then I prayed he wouldn't do something to kill himself while we were gone..

We had a lovely ride and glad to report that we returned to find him upright on all fours....

This week the weather has been more cold and wet. Otto looks like a drowned rat and he doesn't appear to be smart enough to figure out that even though the woolly mammoth passifier isn't in the barn, he can go in there all by himself like a big boy  and get out of the weather.  No , he would rather get soaked and cold instead just so he can be near his buddy (who frankly could care less where Otto is) I have been trying to feed him his hay in the barn at night or if the weather is bad so he figures this concept out (knowing that he is going to need to stay in the barn when the real weather hits if he doesn't get a thicker coat, and soon!)

The concept is lost on him apparently.

If Cassidy goes to the barn, he doesn't really let Otto in the barn so that doesn't work either..

If push comes to shove, I will just have to take Cassidy out and put him in another corral so Otto will hopefully go in his barn and STAY there..

On a good note, he happily eats his grain ration in the barn now because he is a bucket stomper. This must be a TB thing because every TB I have ever owned or known seems to do this annoying habit. Otto  was getting more grain on the ground than down his throat . At $20/bag, we had to change the program. 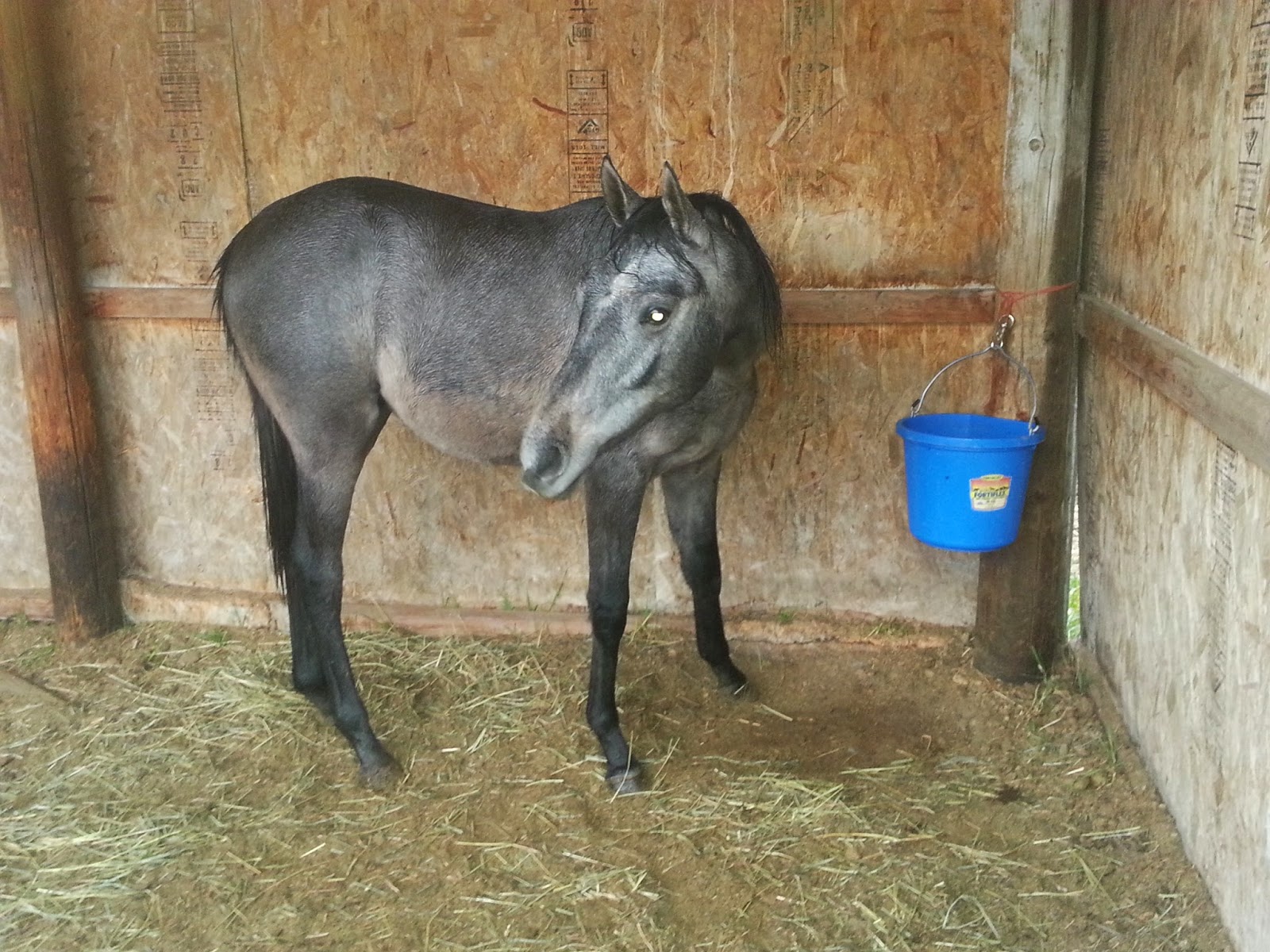 Aside from all this, he is so fun to watch . He is changing, almost everyday it seems. My favorite thing is that I love to watch him canter. It's effortless. No rushiness, no short steps, just big long easy strides...I can't wait to ride that canter someday.