Dearest god in Heaven,
Give me the strength to guide my horse. Make my hands soft and my head clear. Let me horse understand me and I him. My heart you have blessed with a special love of these animals. Let me never lost sight of it. My soul you have gifted with a deep need for them, to see the sun gleam on an elegant head. Always may my throat tighten at the sound of a gentle nicker. Let the scent of fresh hay and a new bag of grain always be sweet to me. I adore the joy of a warm day on the farm. The grace and splendor of a running horse, the thunder of its hooves makes me eyes burn and my hear soar; let it always be so dearest God, grant me the patience , for horses are harnessed wind and wind can be flighty. Let me not frighten or harm them. Above all dear God, fill me life with them. When I pass from this world, send my sould to no heaven without them. For this love you have given me graces my existence and I shall cherish and praise you for it all the time.
Posted by Jonna at 9:04 PM No comments:

What in the World is a Barb ?

More than 3,000 years ago, horses from southwestern Asia and the Persian plateau went with their human masters along trading/sailing routes of the Mediterranean and were crossed onto the Afro-Turkic horses of North Africa. The journey did not end there and this breed type went further along to the shores of modern Spain, Portugal, Cornwall and Brittany. These horses, when bred with the native, draft-type, Iberian horses, produced unusually hardy foals capable of greater endurance than either their sires or their dams. The ensuing centuries of trade, commerce and wars resulted in what could be best described as pragmatic breeding; they used the best of the available ‘type’ from horses in each region they traveled to create the hardiest, most useable horse that would best fit their needs. In the fifth century A.D., Gothic invaders stole herds of Iberian horses during their incessant warfare and took them to North Africa on their constant raids, where they were backcrossed on to the blood of their ancestors, the horse of Afro-Turkic extraction/type. Enter stage right, the Barbary Horses, or Barbs. While the Iberian influence was evident in these horses, the infusion of Afro-Turkic bloodlines resulted in a lighter body type. Less refined than the Arabian, another ancient breed heavily influenced by the Afro-Turkic stock. These horses were hardy, fast and courageous enough to be used for warfare by the Berber warriors. The conformation characteristics included sub-convex, profiles, short and round cannon bones rather than oblong, short backs with low-set tails which allowed them to manuever quickly in warfare and coil thier loins for leaping (airs above ground) during battle.

While I am not a historian, Dr Deb Bennett is and is also a world renowned Paleo-archeologist. Much of what I have researched is directly from her various books, articles and website content found on her own website which I have posted in my favorites . More specifically, the article she wrote titled The origins and Relationships of the Mustang, Barb and the Arabian Horse does a wonderful job explaining in much more depth this history of these horses.

I have owned several horses over the years and have found few that I could say match the sensibility, intelligence, and sensitivity of the Barb. They are a versatile breed that make excellent all around using horses and combine stamina, endurance and hardiness.

For additional information and Robert Painters account of his work with the horse , visit http://www.originalhorses.org/
Posted by Jonna at 8:34 PM 1 comment:

Tamara of In the Night Barbs is hosting a contest to win a free , custom made halter bosal combo from Craxy Ropes by Debbie http://www.crazyropes.com/

Log onto Tamara's blog for details on how to enter. Hurry, you only have until Nov 10th to enter!!

http://inthenightfarm.blogspot.com/
Posted by Jonna at 8:47 PM No comments:

Below are our two oldest geldings, Roman (black Barb type) and Rebel, a rescued Morab that I acquired while still in college. Roman is approximately 21 years old and Rebel is 17. Both have homes here at Acer Farm for life. 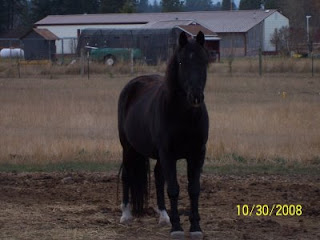 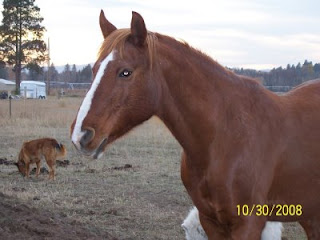 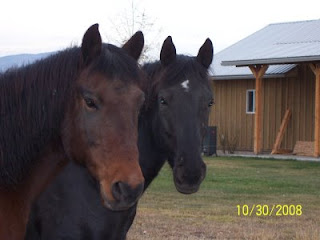 This is Cassidy , aka The Wonder Pony, and Brego. Cassidy is the bay and he is our one remaining Lippitt Morgan. He used to be Tom's stallion when he had his breeding program but has since been gelded. He is the main horse Tom uses for horseback archery, and pretty much everything else. Brego is a 2 year old Morgan/Barb. He has been started and so far has been saddled twice. His training was put on hold after an injury but will pick up again soon. I can't wait to see what he can do with distance riding. He is an impressive mover and quite an athlete!

The Star of the Show 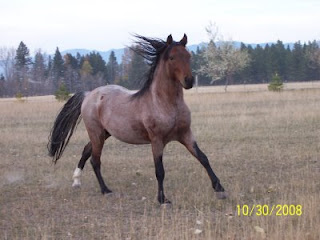 This is JB, taking a romp around his pasture this afternoon.

Greeting from Northwest Montana. I share my life in one of the most beautiful parts of the country with my husband and best friend, Tom, 5 beloved horses, 3 wonderful dogs and the most recent addition to the family, a rescued cat from the shelter. My horse habit began at a very young age of about 5 years old, back in the foothills of Connecticut. By the time I was 8, I joined the local Pony Club and stayed with it through my C rating. At that time I went on to ride, train and successfully show with various trainers in the hunter/jumper circuit. I eventually ended up in Montana after deciding to attend college in the West and this is where I have stayed ever since.

Tom has his own history with horses, having had a successful Lippitt Morgan breeding program for several years. He also happens to be the farrier around Acer Farm and he has even been known to start a colt or two pretty darn nicely. He has an unending list of hobbies but his favorite is Horseback Archery whichh is fashioned after the traditions of the ancient Huns. This is the fastest growing sport in Europe and he trains throughout the year for the opportunity to compete 2-3 times a year. For more information about this sport, www.horsebackarchery.com and www.horsebackarcheryusa.com.


The horses at Acer Farm are a mixed bag of breeds. Barbs, etc will take you along with my experiences with horses , training, and everday life here with our remuda, but more specifically I hope to bring you along with my adventures of pursuing a long time dream of riding and competing in endurance with my barb stallion, known as El Gato Rojo JB, aka JB. We acquired this horse from Robert and Louise Painter of Quien Sabe Ranch in Midvale, Idaho. www.originalhorses.org . Someday I hope to have a couple more of these wonderful horses but at this this time, our little 5 acres is full and we just can't part with the others.

So after my background with thoroughbreds and Tom's background in Morgans, how in the world did we come to the Barb horse? Stay tuned for that story and the interesting history of the Barb horse.

Jonna
Posted by Jonna at 7:16 PM No comments: