A couple weeks ago, Tom snapped some photos of me taking JB for his first spin to try out his wheels. This was our first attempt at ponying and it went off without a hitch. I had been taking him for daily handwalking and trotting for a couple weeks before this but I had expectations of JB being much more animated once he was allowed the extra freedom and increased speed of trotting alongside another horse. In the end I think he was so happy to have the closeness and companionship of another horse, he didn't even think about kicking up his heels. Nevertheless, the wheels seem to still be working. He takes many more steps that look sound than unsound so I am very pleased with his progress.. October 21st marked 5 months post surgery. 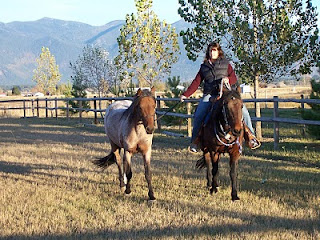 First trot, and ofcourse, he is trying to out trot Cassidy.. (still has the competitive edge I see!) 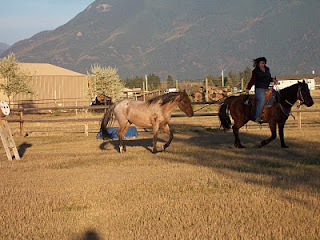 Bearing weight on the right front in a trot.. JB seems to be saying.."ok, fine, I will stay back here then" 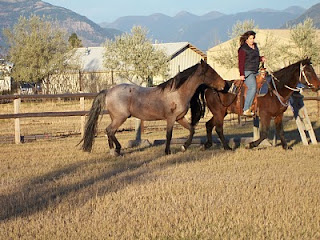 Finally has it figured out to stay at Cassidy's hip 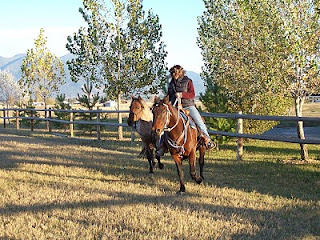 Coming around the corner 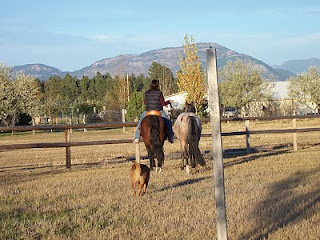 And finally back to the walk , with Munci (the dog) in tow. (sorry about the archery pole in the middle of the picture!)
This , my friends, was a glorious day. 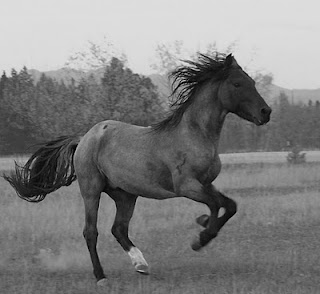 In riding, this is one of my bad habits, born from the days of being thrown into a jumping saddle at a young age, atop a horse much too big for my short legs and flying around a jump course, in two point. What can I say…Old habits die hard… but leaning forward isn’t always a fault.

The 2010 riding season proved to be a storm of challenging winds blowing down on me. A career ending injury to a barely budding endurance athlete. JB had just begun to hit his stride in the Fall of 2009 with his first successful completion of 25 mile CTR ; a most difficult ride as far as terrain, footing, obstacles. JB managed to bring both me and himself through it , not without out struggles but in one piece and healthy nonetheless. It was defining moment for JB and I as partners. We faced some steep challenges but he definitely showed me he was the little horse that could. In the following spring of 2010, some of our first condition rides out, I was pleasantly surprised with this new horse that seemed to be emerging right before my eyes. He strode out with strength, speed and sureness in his step that I had not experienced before. I was overjoyed. After 3 years of struggling to get JB to this point, mentally and physically, we had finally arrived. He was ready to do endurance. It felt like we were on the golden road to many exciting adventures. I was looking forward to the journeys that lie ahead for JB and I.

But the golden road of future success took a hard left for us when JB was injured.

JB’s subsequent rehab from Pastern Arthrodesis surgery has consumed most my time since April. The process has proved to be a windy, challenging course. There have been unpredictable gusts, and alternately, there have been persistent, steady winds. There has been rain, thunder and clouds that loomed.

And we aren’t quite half way yet. There are still puddles to step in, winds to face.

I have tried to limit posts on JB’s rehab, not because I am trying to hide or diminish the challenges we have faced, there have been many; but because I am busy leaning into the wind, facing those challenges as they come at me, and trying to stay the course, stay positive, leaning forward into better times ahead.

JB has been transitioned into a 48 x48 pen now. He’s been there for 3 weeks. He bucks and runs, as much as he can in that space. Physically he’s getting stronger with each day that passes. Mentally, he’s recovering and I see glimmers of the old JB come out. He’s getting less reactive on noises but sometimes, he has bad days and he reverts. I am encouraged however; I can now at least start the lawnmower within a few of his pen without worrying that it will send him into a panic.
We go for daily walks in hand; he wants to trot, but I can’t let him. He wants to run with the herd, but it’s not time. His manners have suffered during his recovery, so I have started asking for him to remember. He’s coming around but it’s a process. Every day is a new day for us.

His old atrophied hoof is still growing out and the new hoof is coming in….slowly. I am not sure what he’s going to end up with at the end of his healing. Right now, his hoof looks very odd. Every 3-4 weeks, we have to rasp his hoof to keep the wall from making too much contact with the ground, in order to keep as much torque off the joint as possible. JB will remain on Farriers Formula until the new hoof is completely formed and hopefully he’ll have a relatively normal foot again.

JB has his 6 month post op anniversary in November. At that time, we will do radiographs. I am both anxious and nervous for that day. It’s the day I’ll know what our future road will look like. Will we find that golden road again where we can cover mile after mile together? Or will it be an easier path that we’ll need to take?

Only time will tell. Either way, as long as it’s a road we can travel together , I am happy.

When I bestride him, I soar, I am a hawk: he trots the air; the earth sings when he touches it; the basest horn of his hoof is more musical than the pipe of Hermes. ~William Shakespeare, Henry V 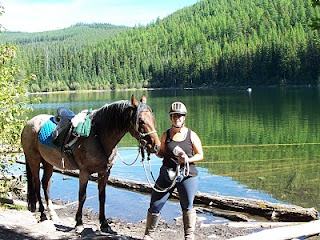 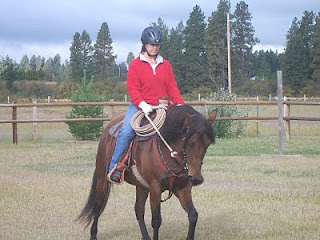 Sunday was cooler but still nice out. I decided I would take her back to Herron Park again and see how she did. Once again, we headed out, but took a different trail this time. There were fewer distractions around and she seemed more willing to focus on getting down the trail. We were on the flats and she offered to pick up a trot. We trotted along for a good mile before she wanted to stop. I could tell she was breathing quite a bit heavier than what was normal for her. Her stamina had definitely suffered with her cold. I suppose it’s just like when a person gets ill; it takes a while to get back to yourself physically. We headed up another loop trail and had to do a bit of climbing. About half way up the hill, Maggie stopped again. This time, I was less concerned about any other issues creeping up. She wasn’t sweating but I would just let her take her time. No sense over doing it. We rested, then we went on our way. Pretty soon, she stopped again. I took advantage of the stop to take off my sweatshirt and tied it on my saddle. In the process, I gave her a carrot from my packs. I climbed back on and asked her to move off. She did, but with a little hesitation and swish of her tail. Another few minutes, she stopped again. "Hmmm.. This again?"I thought.
Had I really managed to unintentionally taught her in one ride that if she keeps stopping, we’ll turn around and go back?? I encouraged her forward with my legs and she tried to cow kick me again. I asked a bit stronger, only to be greeted by her turning her head back over her shoulder to give a pinned ear mare look and another attempt at a cow kick. It’s her signature move and she usually manages to catch the bottom of my heel. (Something I know I will have to address at some point, but not this day!)
At this point, I knew my next attempt might become a bit of a battle of wills and I wanted to be prepared; or as prepared as I reasonably could. .I attached my GPS to my saddle packs so it wouldn’t go flying out of my hand. . In the process of me fiddling around, I noticed her ears suddenly perked up at the rustling of the packs and she looked at me over her shoulder as if to say…”Snack???” Talk about an Aha moment… I realized what the issue was…at least part of it anyways.
She had managed to figure out that when she stops, she often gets a carrot snack. She wasn’t getting a snack and that was why she was getting pissy and would keep trying to stop, both days. She wasn't feeling bad the day before, she wanted a carrot.. UGGH …How could I have been so dumb??? So, what else is there to do but to correct the problem I had created.
I asked her forward, with no offer of a snack. She refused, I asked with a bit more insistence with my legs and a strong verbal cue of “forward”. She shook her head, pinned her ears and half crow hopped a few steps.. ah yes, the Maggie snit fit… I asked again, this time with a stronger bump, bump with each heel. She went forward, in a sideways kind of motion and finished with a large leap crow hop forward.
"Your getting closer"….
I asked again, only softer this time, she took a step.. shaking her head in frustration. Again, a nudge, and a step. " Now you've got the right idea!"
Another squeeze, and finally she took three or four steps forward. Not happy, but forward. I'll take it...It was a place to start.
We carried on this way and went through this a couple more times before she decided she wasn’t going to get that carrot and we weren’t going to turn around and go back either.

Fool me once, but not twice... All in all, we made it 8 miles on Sunday and worked through those issues. Maggie is feeling fine. It will take her some time to get her stamina back to what it was but that will come in time. We got back to the trailer and I gave her a hay bag. I don’t know if I will continue to carry snacks with us anymore, at least not for a while. I learned a valuable lesson. I have a mare who is way smarter than I gave her credit for.
Posted by Jonna at 3:55 PM No comments: