It's been a while since I posted much in the way of photos so here are some taken when I was reintroducing Maggie to dragging something around. 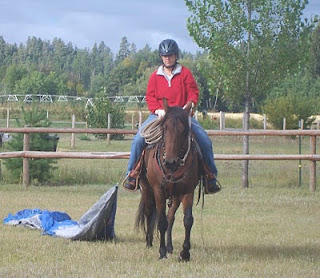 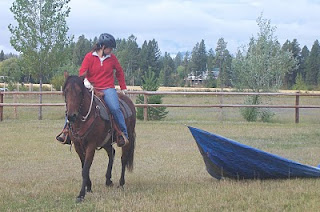 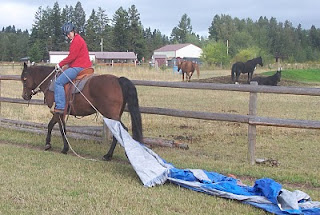 She's pretty bored with it, as you can see but it's a valuable tool. Tarps or things that "blow" in the wind can really spook a horse and land a rider a visit to the hospital. I will usually start out with a rope just dragging. I will switch hands, and therefore the horse will need to "switch eyes" ** make sure you have worked on this from the ground before you try it from the saddle..please!) I will also have soemone else drag the tarp, husband, or husband on his horse and we will follow the tarp along. In both dragging and chasing, we start at a walk and work up into a canter. To progress, we eventually add a towel to the rope, then a bag of some kind of plastic , something that makes noise and then progress from there depending on how the horse has handled it. I should mention that I didn't just jump on and start dragging noisy things around. I introduced her to all of this long before , from the ground , as part of her groundwork. Noisy plastic bags and tarps, and even bubble wrap was all part of her ground work. Maggie seems to be a pretty brave girl and doesn't get too worried about noises so this process has gone quite fast in comparison to what I have experienced with other colts.

As the days roll by , Maggie is slowly getting better from her recent cold, virus or whatever it was that was ailing her, thankfully. I would say by the weekend, she'd be ready for another long day. She has had over two weeks off from work now. Unfortunately, two others, Rebel and Roman, began exhibiting the cough , snotty nose, lethargic affect. So they are working through their symptoms now. It may end up hiting the rest of the herd as well but I am keeping my fingers crossed.
With Maggie on the mend, I thought maybe some easy work in the arena might be good for both of us. With endurance season coming to a close for me, I shift gears a bit this time of year. I get back into doing all the "other " stuff as far as training goes.

Maggie is a Morgan and what is a Morgan made for??? Pulling, Harness....yes pulling a rider up hill (tailing) is a good thing too, but that is not what I am talking about here. I am talking about hooking onto something with some heft and dragging it away, be it a log, a bawling calf , or whatever needs to be moved.
I started the leg work with Maggie this past spring with getting her accustomed to dragging tarps and dragging ropes. Maggie took right to it and the other night , with a short refresher course, I looped my rope around around small 8 ft wood pole and away we went, just like she'd been doing it all along. In time, we'll work towards pulling heavier and heavier objects and maybe I'll have to dust off my old harness eventually and get her hooked up to that!
Posted by Jonna at 6:59 PM No comments:

In response to a few of your concerns, no I haven’t gotten lost in the wilderness, eaten by a grizzly bear or abducted by mountain goats. Yes, I have been a bit absent, I’ll admit. So what’s been going on?

In early August, for the first time in a long time, I had no desire to climb on a horse. I had no motivation to do much of anything. I fell of my normal exercise and eating routine and felt even worse, but I couldn’t seem to get myself to straighten up and fly right. I think it was a compilation of the stress at work, caring and rehabbing JB, and balancing a couple of other stressful personal situations that have come up this summer. Basically, I hit a wall and started experiencing bad Ju Ju… (or at least that is what a friend called it, whatever Ju Ju is…)

So I took a much needed vacation. 14 days days of R&R to be exact. I wasn’t productive at all, I didn’t really go anywhere special, and I only climbed on a horse once. Since, I have slowly managed to regain some traction in the motivation department. I am back in the saddle and have resumed some sort of conditioning routine with Maggie. I decided that for the fall season,(however long it may last before the weather turns too bad) I would focus on building Maggie’s stamina on the hill work. Long ,slow hill work. It’s her weak spot.

During my funk, Maggie ended up getting about 3 weeks off by the time I pulled myself back together. So we lost some ground in the fitness area but I am happy to report with things getting back to a normal routine, Maggie was making some good gains on her endurance on the uphill climbs. Things were humming right along until about two weeks ago.

Two things have reared their ugly heads in an attempt to derail us. The first thing is that it appears I am having some saddle fitting issue now with Maggie. She has already started getting her winter coat (ughh) The first time I went to put a saddle back on her after her long hiatus, I noticed white hairs on her back, right where the bars of the saddle lay. Not only that, but the hair coming in had arippled looked to it.. definitely a problem. The worst of it is towards the front and while there are more white hairs on the right side, they are present on both sides. I was shocked... really. My saddle does actually does fit her quite well, even had it checked, and approved, by a professional saddle fitter this past spring. Her back hasn’t changed all that much, atleast not to the naked eye. I have been using the same pad situation all summer. The sweat patterns always looked even. So why/how did the white hairs appear now? Why would they show up during a time when she wasn’t being ridden at all? I have consistently checked her for soreness in her back and she has never once shown any soreness, even after the 35 mile ride in July.
I have had poor fitting saddles before but never had an issue where white hairs showed up.

So here is where you readers come in.... help please...

Or could she really have developed them from one or two rides where the saddle wasn’t riding right? Can white hairs appear that fast?? Still, wouldn’t she exhibit back soreness?

I did remember that one of the last times I rode in the saddle, prior to her hiatus, the saddle seemed to be creaking more than I recalled it ever doing. I remember thinking that was odd and chekcing out the saddle but everything seemed in check. I didn’t give it much more thought. Maybe the saddle is needing reflocked?? I guess I also need to check the tree, make sure that something hasn’t happened there. I thought I would also try riding my older gelding in it and see if it creeks with him. If it doesn't, maybe that indicates it really doesn't fit her anymore??? I'll report back on that.

So for now, until I can figure this out, I am riding her in my Western wade, which is working well as far as fit.. for her. It’s just a bit heavier than I prefer and isn’t real comfortable for me for long hours…. But I’ll deal with it I suppose.

The second issue that has creeped up on us is that Maggie started coughing during a conditioning ride about a week and a half ago. At first I thought it was due to dryness of everything. It had been very dusty. Last weekend, I hadn’t heard her cough in a couple days and thought it was resolving. She wasn’t exhibiting any other symptoms to indicate she was ill. No snotty nose, no wheezing, no temp, eating drinking, etc. So, chalking it up to the dryness, I opted to head out for a 4 hr ride last Sunday. She seemed fine for the first several miles, but I noticed she seemed a bit lethargic. About half way through the ride, the coughing started whenever we would do more than a walk. I also noticed she was showing some discharge from her nose but it wasn’t yellow, more of a grayish/whitish color. So we finished our ride short and headed home. I took her temp which was well within normal range. I watched her for the rest of the weekend closely. In an hour of being within earshot of her, I heard her cough three times. Not a lot and not consistent but she did continue to act lethargic , even out in pasture. By Monday afternoon , her nasal discharge was bit more on the yellow side but then later her nose was dry, with a little clear fluid. It seems maybe she is fighting something off and I would imagine if it were serious she would have shown more in the way of symptoms. None of the other horses are exhibiting any symptoms either, which is good. So, for now the vet says to let her rest for a week and see how she does. If she gets worse, I'll probably have to take her into the clinic. I am hoping she just has a little cold due to the extreme weather change we had. 80’s to low 60’s and wet … certainly makes me want to cough and go hide under a blanket.
Posted by Jonna at 10:31 AM 5 comments:

I was perusing around the Easy Care website, when I stumbled upon a new product they are looking at possibly making available. No, its not a new model of hoof boot , or a hoof boot accessory. It is a portable Corral system. They are looking at partnering with the company called RoFlexs , which is based out of Germany, to bring this product to the US. For right now, Easy Care is looking for feedback on this from their customers, what would we be willing to pay, etc..

Check it out here to watch a video on the system.Being that it is made by the Germans, I am guessing the engineering is likely top notch.
Posted by Jonna at 7:04 PM 1 comment: