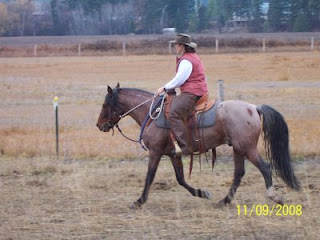 This week has been quite wet with no indications of it letting up anytime soon. Sunday was the our last ride and it was raining then too but I had my thrifty hat to keep the water out of my eyes. Ok, it's an ugly hat and has seen better days... but hey it works...

It's been dark by the time I arrive home after work so riding during the week isn't working out so well. Sundays ride went great however so I will linger on that until I can saddle up again. Tom took some pictures of us when we arrived back home and I took a couple more loops around the pasture. I am quite happy that he looks like he is moving as well as he feels when I am riding him. We had a bit of rough go this summer, our first year to work towards riding endurance. As a result he is now in pads andEDSS shoes. It seems to have done the trick. This summer he came up sore in his first LD ride. We didn't know at the time what it was because he did not exhibit symptoms when he was hoof tested and he never developed swelling or heat anywhere. I gave him a week off and in 3 days he appeared to be back to normal. In September, it was quite a bit worse and we realized at that point the July soreness was likely related. We made it about 8 miles into our last LD for the season and JB was stumbling alot when he finally tripped quite badly, nearly going down. His next step was acutely lame. I walked him back to ride camp...all remaining 6 miles of it. We feared a broken coffin bone but the xrays revelaed a 7 mm sole, a little on the thin side and likely a stone buise in the sole. So, to give him some relief and comfort while he healed, along with a couple days of bute, we opted to have the EDSS shoes and pads put on. Since then he has gradually improved his way of going. He reaches more and is much more forward than he was all summer.

Tom will remove his hoof accutraments before long and I will be left to decide what to do next year. Do I go back to pads and shoes or do I go the hoof boot route. Pads certainly don't help keep the sole healthy, that I know. Boots seem to be all the rave but they also have their pitfalls, like the possibility of losing them (they aren't cheap) , rubbing, etc. I guess I have all winter to decide! For now , I am enjoying the ride!
Posted by Jonna at 9:41 PM