The day started out on the chilly side but the sun was out. I would take JB out first. Things got off on the wrong foot while I was trying to get him ready. His deep seated fear of motorcycles, 4 wheelers, snowmobiles, (or anything in that category ) came bubbling to the surface when a neighbor from down the road came by our house on a scooter. JB happened to be tied to the trailer, far out of harms way , but it doesn't matter with him. It could be a mile away and he gets worried about it. He paced frantically at the trailer as the scooter passed by. I am not sure how I am ever going to get this horse through this now. He was actually doing quite well until last fall when he was traumatized at the ride in Washington when we had to pass right through the middle of a dirt bike rally.Anyways, I could see that the scooter set things in motion for our ride today and I almost decided against going since I was a bit on the edgy side now, and I knew I had seen a couple other 4 wheelers go by earlier. If I went out, there was a good chance I might run into one of them. I really didn't want to give JB another bad experience but at the same time, I need to continue to expose him to it and hope that eventually I can get him over this fear. I took my time saddling and and getting him ready trying to decide what to do. I decided to handwalked him up and down my dead end road for about 15 minutes to see if he would settle in a bit(and it would give me a chance to settle my nerves) It seemed to work and he started relaxing a bit. I walked him up the road until I hit the dirt road and then got on. JB was pretty tense but after about a mile, he settled in. No dirtbikes or 4 wheelers to be seen.
Most of the vehicles that came by were courteous today and slowed way up. Ofcourse, I stop my horse and face the oncoming car. It seems to send the message loud and clear to "slow down"! Not sure why it works but I am going to keep doing it. We made it back and the last mile of the 4 we completed was probably the best. Just as we were coming over the last little hill before my house came in to sight, the 4 wheeler came down the road. JB ofcourse locked on and tension ripped through him again. Luckily the 4 wheeler went the other way.. thank goodness. JB relaxed again and we made it home with no further incident.

Since the sun was still shining, I quick grabbed a snack and caught Maggie.
The photos posted below in the reverse order that I wanted them to post in. I tried everything and cannot resort them on the page. I even tried refreshing my blog by clearing my cache, but it didn't work. I gave up after fiddling with it for a half hour. (If anyone has any suggestions, please do tell because it's absolutely maddening not to be able to organize the photos the way I want to)

Anyways, Maggie is saddled and ready to go in the first photo. I have to ride her in my western because its the only saddle I have that fits her table back. She is ridiculously broad. Scroll down to see the before and after She was an absolute mess when I caught her. She apparently has been enjoying the mud a little too much. 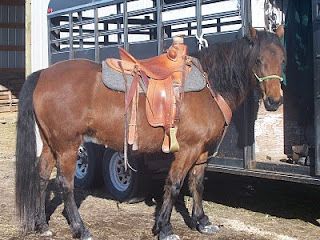 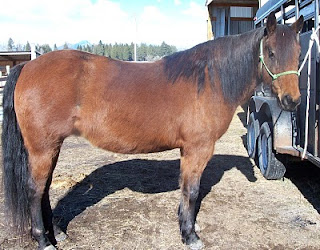 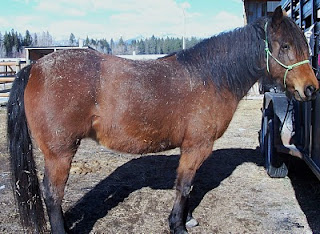 Maggie and I went about 4.5 miles. This was the second time I have had ridden her with out a companion. She's very honest when she is unsure about something. She just stops short(very short) and looks. Sometimes she shies a bit but so far nothing too out of control. All in all, I was quite proud of her today.
Posted by Jonna at 3:05 PM

Forgive me, as I know JB is your special boy, but the more I hear about maggie, the more I love her. She seems like a total blast!

Maybe you could enlist the help of one of those 4-wheeler riders- we had good luck getting my horse used to them by riding ours out in the field with the horses loose, just riding them slow and then allowing the horse to follow the bike. If they think they are "running it off" they seem to lose some of the fear. Not to say they couldn't still be scared by them, but they don't have that panic reaction that they used to have. Also, I have on occasion fed from the 4 wheeler and the tractor, that helped too.
Karen W.

oops- meant to say we were riding the horses out in the field with the 4 wheeler (the horses weren't loose).
Karen W.

@ Mel- no forgiveness needed! Maggie is surprising me each time I work with her. She has really come around since she first showed up and I too am liking her more and more.

@ Karen- Funny you should mention that. We actually have a 4 wheeeler and I use it all summer to clean out paddocks. JB stears clear of me when I am on it , but he doesn't have the strong reaction when I am actually running the 4 wheeler as opposed to someone else..I guess he knows I am pretty safe.. or something. That being said, my husband and I were talking and I am going to have him (husband , not JB!) drive it, let JB Chase it, and hopefully build his confidence , eventually working up to being able to have it being driven back and forth , or towards him, around him, etc as I am working him in the arena at home. Keep your fingers crossed !I think it will be a process.I like the idea of feeding with it. I don't know why I haven't thought of that sooner! Thanks!