A Top Ten Finish for Maggie

All week, Maggie gave no indication that she was anything but her normal self so I decided I had no excuse not to attend the Camas Creek Canter Endurance ride this past weekend. So Friday morning, withwhat seemed to take a lifetime, we finally managed to get packed up and on the road by about 2:00. Having a puppy and another full grown German Shepherd only complicates matters of travel, but we managed. We got into camp about 4:30 , I took care of registering and vetting through while "T" set up the tent, the awning(very high class at that) and other matters of camp. Luckily, the predicted heavy rain and severe thunderstorms skirted ride camp. 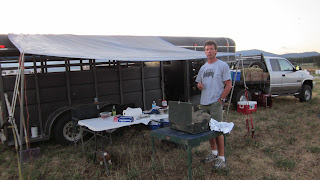 We finally settled into the tent way too late and completely exhausted. Then, pre -ride anxiety kicked in for me, resulting in a sleepless night..

Ride start time was 7:30 for LD riders, all 17 of us. I decided that I would try putting Maggie in the mid to back part of the pack of riders this time and see how it went. When I have started her in the back before, she just puts up a huge fight because she knows those horses are ahead of her and she wants to chase them down. The joys of a herdbound competitive mare. Well, my plan didn't work. The front runners went out and then a few more and then I decided to take my spot. She started out really good but then 3 horses behind were catching us and the race was on.. she starting pulling pretty hard. I finally pulled out of the frenzy and let them on by so we could be alone. She only had a small meltdown that was manageable and we continued on our way. She kept pulling, the entire 16 mile first loop. She refused to drink, but I kept her wet with water bottles and rode her into the one of the creeks  at one point just to cool her down. Another rider caught up to us, but it was a 50 miler who had gone off course at one tricky part of the trail and had ggone 6 miles out of her way.  Her and I rode together for the last 7 miles which helped Maggie. I wish I could remember her name but she was from the Kellogg area and had a lovely little mare ! I was glad to have the good company. We walked in the last 1/4 mile to start getting the pulse down. We finished our first loop in 2.5 hours. I knew it would take her a few minutes to get to pulse criteria of 60 , given the pace of  6.4 mph ,  which was faster than I wanted to go but Maggie was feeling strong. She scorred A's on everything but cap refill and hydration, which were B's. That wasn't unexpected considering she had refused water and food the entire way.

I put her back in her corral for the one hour hold and served up her beet pulp with Ultium (certain she would never refuse that) and hay. I began to worry when she wouldn't touch any of it or even drink. As a distance rider, my concern was that I would be causing her a metabolic crash by going back out.  As a horse person who knows her horse,  I knew Maggie is still very much in the "figuring this distance riding thing out stage" and that  her breeding and family history have proven that she is no delicate flower. In the few moments of trying to make the right decision,  a good friend who had come to the ride to see me, gave me some great advice. She comes from a long lifetime of ranch and cattle work along with a successful 3 day eventing career. I respect her immensely. She gave me some good advice that she once got from another friend one time. "A horse is a professional at being a horse. We are professionals at only thinking we know what is best for them."

The point was this;  maybe Maggie just wasn't thirsty or hungry yet, if she was, she would likely try to eat or drink something. I knew  Maggie wasn't in any metabolic danger at this point and I knew that given her history, she would likely drink during the second loop sometime. I finally decided that I probably needed to carry on and finish. Maggie proved I made the right decision when I went to get back on her .  I had to get on a moving target and she wanted to trot back out to the start. Ok, well then... here we go...

I had nine more miles which proved the be the prettier loop with a few less hills. The footing on this ride was much better than last week's , but still alot of logging road gravel. We finally made it to the only water on the second loop. I jumped off and pulled Maggie's bridle. She dove her whole nose into the water tanks and drank up....almost exactly as I predicted. We were at about 22.5 miles at this point.. Way longer than she should have gone without water or food. We had just a little further to go to finish and  she showed no evidence of slowing down; she boogied in her big girl trot until we hit the last 1/2 mile in to finish.  I dismounted, loosened her girth and walked her into the water tanks at the finish line. She drank again really well and I kept sponging her while I watched her HR come down...69....65.... and then hung there for a 1 minute of two so I kept sponging. Finally, she was down,  and we made our way over to P&R. We pulsed down to 60 and our final 9 mile loop took us 1.5 hours which was roughly a 6.0 mph pace. I waited in line for final vetting. That was when I found out that we were among the top ten finishers. I decided to go ahead and stand for BC. It was probably unlikely to get BC , considering her lack of drinking or eating, but I was also seeing and hearing that a lot of the horses were coming in looking pretty rough. Crazier things have happened. Maybe we would get lucky.

We did our initial completion vet check and her scores on hydration and cap refill were back up to an A-. Gut sounds were still a B and I think I had another B on something else but I can't remember what. I was slightly dehydrated and little tired.  For the trot out, the vet kind of shook his head. I thought at first it was bad and maybe the left hind thing was showing up again, but to my surprise, he said her impulsion and attitude indicated she wasn't even tired, that  she looked like she could easily keep going. He said she looked incredible. That was music to my ears!

We were to return in one hour for the BC vetting. Maggie drank again on the way back to her corral but still didn't eat in that one hour hold time, just stood quietly and rested and watched the other riders coming in with alert attention.

We went back in an hour for the BC vetting. I can't remember all of them but the cap refill, skin tenting , impulsion and attitude all stayed at an A. Gut sounds were still a B, anal tone was a B. There was probably one or two other B's, but otherwise, she had all A's.  The vet stated she must be a good drinker and eater. I had to fess up. I told him she had not had anything to drink until the second loop and that she hadn't eaten hardly anything since the night before. He looked rather shocked. He said to keep an eye on her and come find him if there was anything that seemed wrong.

We didn't end up taking Best Condition , we finished 7th , in fact I think I tied for 7th with another rider. I was pleased with how incredibly well Maggie did without doing all the things an endurance horse is supposed to do. It's kind of a mystery to me. My  hope is that in time, she learns to drink and eat more often. At the same time, this might just be how she is too.

I let Maggie rest for about 3 hours while we packed up camp. I don't normally like to haul a horse after a ride, but we needed to get home for some other committments. She had eaten her beet pulp and I hand grazed her for a while and she drank again so I felt like she would be ok to manage a 2 hour trailer ride to get her home  where she could get turned out onto some pasture for the night.

Here's to another notch in Maggie's distance career.. Thank you my little Bay Morgan wonder!

CONGRATS! What a great finish, and what a tough little mare! I know you must want to pull your hair out when she won't eat or drink, eeeargh.

My niece was there too on a grey arab-Sinwaan. I believe they came in 8th.

I know we want our horses to eat and drink, but some of it depends on how well hydrated they are before starting. Also it depends on the weather/humidity.

In my mind, it is first of all prevent symptoms having a well hydrated and well fed horse to start with, then treat symptoms if they arise. You can lead a horse to water...but you sure can't make them drink and I believe the horse will drink when it is thirsty...

So if their turgor is ok...they are probably fine.
Also importantly is the color of their pee...did they pee? if so is it light in color?

Regardless, sounds like you both did a great job!

Congrats on your finish!

woohoo good job! I hate worrying about a horse when they aren't eating or drinking... but many horses I ride often don't drink for the first 20 miles. She'll get better as she continues down the trail!
- The Equestrian Vagabond

@ Funder-thank you, yes, was really really concerned I was making the wrong decision at the half way point.. was relieved when she went out strong and drank on that second loop.

@FalconFeathers- Hi- I believe your niece and I walked in together. Is Sinwaan flea bitten grey? Hope he was ok, I know the vets were concerned about him at the end.

@Merri- Thanks.. and my hope is that she will continue to get better with the drinking and eating.

great job! I bet Maggie will learn to eat and drink, but I think your instincts that she just wasn't hungry were probably right. I know that on training rides my horse doesn't need a snack at 15 miles, but it is easy to start worrying. And a B on gut sounds might be her "normal." I think you have the beginnings of a powerful little endurance horse...

AWESOME!!! She looked great in her picture.
~E.G.

Hi Jonna, This is the first story I've read on your blog so I don't know how many rides Maggie had done before Camas, but I had the same experience with my horse at her first couple of rides. The excitement of the ride and ridecamp were a big distraction for her and she didn't drink well (but did OK). After 5 rides she's much better about it. Also... if you have the opportunity to put her in a 50 that might help her figure out she'd better eat, drink, conserve energy, etc. I will look for you at the next Camas ride! Doing any other MT/WY rides? - Karen (www.allthingsendurance.com)