Well not much riding has been going on for me.  Two weekends ago we went for a trail ride about, 2 hrs only because my knee  really started acting up.. (more on that in minute) but that has been it.
My hubby and I traveled to Vancouver BC to spend a couple days doing the touristy thing prior to traveling northward  on to MT Currie ,BC for his Canadian  Horseback Archery competition . Getting there made for a long drive, about 13 hrs one way.  But it was worth it.. seeing the ocean again was the highlight for me,  even if it was the cold Pacific. 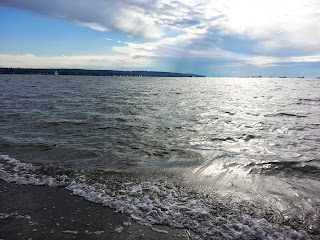 We got to see a lot of the Vancouver area since we stayed with friends just outside the city for a couple of night.   BC is similar to Montana and the Rocky Mountains but with the added feature of the ocean and a much more wet climate.  Lots of lush thick green forests. Rain is common in that part of the country,  but we  lucked out and had a couple of really beautiful days.
Once we got to where the competition was held, Near Whistler ,B.C, and on a reservation, the true adventure began for me. As camping goes, I haven’t ever really mastered the art of it… not being really into the “roughing” it without access to a daily shower. Luckily, I stayed with our  friend in Vancouver one extra day and only had to camp out one night.  “T’ went up a day early to get a little extra training time and I met him up there early Sat morning to see the competition. 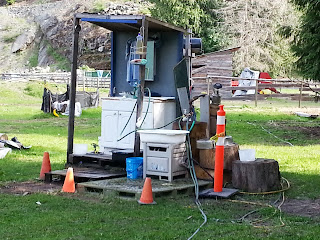 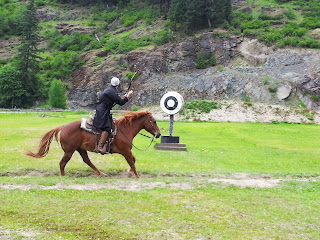 When I arrived, I was thankful for the decision to stay in  civilization for the extra day , especially when I saw the bathroom facilities. It was two outhouses, with a 6 foot hole in the ground.
This was the “bathroom” sink…
It was a two day competition so as soon as “T’  was done with his turn on Sunday morning,  we beat it out to hit the road  and head home. We made it the trip home by Monday mid day, having to stop for an overnight on Sunday.. too tired to continue… 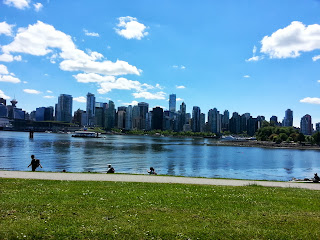 I'm so sorry to hear about your knee injury! Ouch.

That's great that Zena made it through kenneling- but the bathroom incident certainly sounds unpleasant.

I haven't blogged about my new dog adventures yet, but I've ended up with a GSD as well! We intercepted him on his way to the pound- I adore him. I think I'll have a Shepherd from now on!

We have two Boxer-Malinios mix six month old puppies who we are working through the fear-aggression thing. They are both a bit timid and can be quelled with a simple "what did you just do?" question. We are going on vacation to Oregon for 10 days and will have to leave the pups in the kennel. I'm hoping they come out with no more issues then they go in with.

Does T use a horse bow for these competitions? If so, what kind? I have a recurve and have been fascinated by the idea of shooting from horseback. It looks like fun.

Bummer about the knee.

Yay Xena! and boo for your knee. Glad you're going to get it fixed, even if you've gotta let it heal...

How'd T do in the competition?

CG- Yes, do a post on your new pup! I want to hear all about him. I grew up with GSD's. They are great dogs. Glad you saved one on the way to the pound.

Karen-Thanks for reading! Malinois are very high energy dogs..Since yours are young, all I can say is socialize, socialize socialize. It would be scary to kennel a couple of pups but hopefully the kennel owner is caring and tentative enough. I let the kennel owner know way ahead of time and watched her interactions with Xena before I ever committed to taking her there. It has to be a good match.

Funder-yeah, the knee is total a bummer. It's hell to get old!! T did okay in the competition but certainly did not shoot his level, a 120 on the first day and 112 on the second. He should be shooting in the 140 -150 range but his head was not in the game and he gets really tense for competition.. I think I can understand that...