Old age, PPID or something else?

Rebel is my older gelding. He is unpapered so I don't have an accurate age on him but we think he is somewhere around 25 years old, give or take.


Rebel is my rescue horse, although I wasn't truly the rescuer. My friend rescued him and then I bought him from her shortly after she got him home. I have mentioned him and his story somewhere on this blog, probably a few different times. He had a pretty rough start in life and those scars have never completely gone away but, somehow, I managed to gain some level of trust. Never to the level I had hoped . Rebel has always been his own horse and highly intelligent. He had a lot of issues. Some have been resolved. Others, just lessened over the years. All in all , he is my buddy. A kind horse to handle but a Rebel, as the name suggests.  He came with that name. I should have changed it in hindsight but it fits him.

Rebel is the horse that has seen me through multiple moves and phases of my life. Always my constant companion.  Plenty of times spent crying into his mane, plenty of hours just telling him all my concerns. He's been that heart horse for me in many ways. I have had him since he was four years old. He is also  the horse I did everything wrong on and then went back and fixed as much as I could when I learned how to be more effective. He was incredibly forgiving of me considering his first experience with humans.  He suffered though my  bad fitting saddles and poor choices of bits because of bad advice to a somewhat impressionable young east coast girl, lost in the traditions of the west.  He even caused me to have to get  stitches in my lip   when he flung his head and caught me in the chin.  I still have a scar from that. He was a renegade with other horses, and is what is often referred to as "proud cut". He will cover a mare. My guess is he was bred before he was ever gelded and was likely gelded the old fashioned way.  He once jumped out of his pasture fence to come with me when I rode the neighbors mare down the road. He and I have seen more miles of Montana trails than any of my horses. Oh the adventures of a young girl and her fiery Red horse.  I could go on and on down memory lane with Rebel but that is probably quite enough!

These days, Rebel is quieter, arthritic and  is officially retired . A few years ago, a tripping issue developed and has now worsened .  He has always been a  very stiff horse.  The tripping that developed  is not just stumbling, he literally goes down, and had gone head first and flipped over.  Worst of all, he has done it  with me on him , multiple times.Its really scary and I stopped riding him because of it about 4 years ago. We went through the gamut trying to see what the issue was. We ruled out his feet and teeth. All we could determine is that it was related to his stiffness. He has always been a really stiff  horse and it worsened whenever you picked up the reins and asked for anything involving a little contact. Oddly enough,in spite of that, we found a use for him.  He was able to run down the archery track and do fine, no tripping , as long as you left the reins alone . He packed archery riders for two seasons with no issues.
Most recently, my husband was riding him earlier this spring to give him some exercise. The stumbling in the front didn't seem to be showing up but  now he was starting to stumble really bad with his hind quarters. It was like his back legs would just stop working after about 15 minutes of being ridden and they would just go out from under him.  I brought him in to a chiropractor to be worked on to see if it would improve . The chiropractor said he had some arthritis and scar tissue in the pelvis region. It was his recommendation  to keep him on a light workload, especially since Rebel prefers to not move if he doesn't have to. My guess is that he hurts.  so I keep him on MSM to help with that. The chiro appt didn't really seem to make much difference. He kept stumbling behind and  we have not continued with giving him routine exercise, other than what he gets when he is in the pasture.

The latest development with him in the last couple of months is that he is now losing muscle along his top line. Right over the top of his bones on his hnid quarters and then the part of his spine in front of the sacrum is poking out.The muscles seems to have "wasted away"  It seems to have happened quickly.  His teeth were done in April and he is wormed regularly so the vet doesn't believe those are contributing factors.

There are , at this time, two possibilities that are likely.   It could just be he's getting old and he needs more calories to maintain his weight. Muscle loss can happen in old horses. Or, it could be the beginning of Cushings or maybe , the other "C" word.. cancer.

Equine Cushing’s disease is one of the most common diseases of horses older than 15 years of age. This syndrome is better defined as Equine Pituitary Pars Intermedia Dysfunction (PPID) because it reflects the location within the brain that is abnormal.

Cushings Disease  is most commonly  caused by a tumor on the pituitary gland  located near the base of the brain and is often referred to as the “master gland” because it controls the body’s hormonal system. This tumor  causes the adrenal glad near the kidneys to produce  the stress hormone called Cortisol.  Cortisol has a lot of  functions, one of which control metabolism to regular muscle tone. Over production of the hormone Cortisol is what ultimately does the damage. Horses become insulin resistant which causes an increase risk of laminitis.

Correctly managed a horse can survive with Cushings anywhere from 5-7 years on average. Management can involve feed and drugs in some cases. High doses of Omega 3 's has been discovered by Texas A&M to signifigantly help by decreasing inflammatory responses.
**There is my non scientific understanding of the disease, although I am certain it is much more complex than that.

He doesn't have all the symptoms of Cushings. He has stiffness and lethargy but he shed out completely this spring, other than his legs, which he has always had trouble with. The only change is that this year the leg hair is moreso. See pics below.  He has not gotten the long, wavy hair coat that is the most common symptom of Cushings and he has not shown any sign of laminitis. Another symptom is increased water intake. I honestly can't monitor that because he is in with two other geldings.

After consulting with my vet , we have decided to opt for the conservative approach.

For now, I have put him on an increased calorie diet. I have started him on a senior low NSC (in case it is cushings) grain , alfalfa pellets and fat in the form of Canola oil. I might also be adding in an Omega 3 supplement like Equi-Bloom, which is often recommended for horse with Cushings. My approach is to give him the calories and nutrition while assuming it could be Cushings. Horses with Cushings can't handle high carb loads, thus the reason for the NSC grain. I have chosen to try a Nutrena Senior feed called Triumph.
We will give him a few weeks of this higher calorie diet to see if it helps his weight and energy. Lucky for me, we have had a ton of moisture and our pasture is quite lush so he is out on pasture most of the day. Laminitis is the risk there but I will be monitoring that. If he is getting Cushings, he may be prone to it.

I will reevaluate in 4-6 weeks. If there is no change, I will bring him in for bloodwork and possibly the Cushings lab test. Keep your fingers crossed he has some good improvements with diet.


Here are some other photos of his body condition - which doesn't look bad but his has lost muscling along the top of his rump and his spine. 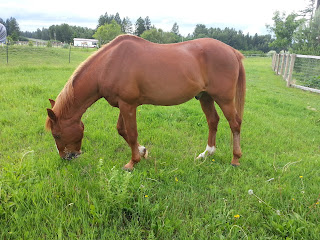 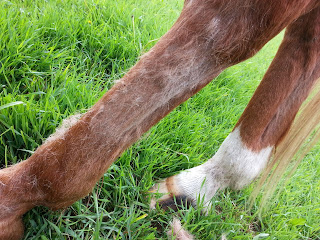 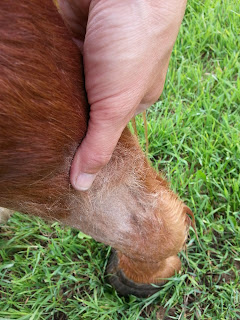 He sounds like my mom's horse, who ended up being diagnosed via xrays and ultrasounds has having arthritis in his spine. It was starting to press on his spinal column, causing loss of coordination (tripping), disassociation with his hind end, and loss of muscle tone.

A couple of things they did to test him:
1) Cross his hind legs, one over the other. He should correct this on his own pretty much as soon as you remove your hands and let him. My mom's horse would stand there.
2) Pull on his tail and see if you can move his hindquarters much. He should resist and pull against you.

They also checked her horse for EPM, as the symptoms can be a bit similar. So another thought there.

Hi Crysta-Interesting. I will certainly try those two things. EPM is not prevalent here in our area . Have never even seen an Opossum around...but good thought to keep in the back on my mind. What did your mom do then to keep him comfortable?

First, the vets at UC Davis recommended that she immediately stop riding him, due to his ability to trip/collapse at any time (like your guy). HUGE ability to cause a major wreck and really injure someone. His prognosis wasn't very good. Gradual deteriation over time until he would probably need to be put down due to inability to get up after laying down or other problems. The vets said she could give him supplements for arthritis, but since it was due to actual pressure on the spinal column, that they would not necessarily make much difference (i.e. they wouldn't relieve the pressure from the bone). They said that he probably actually wasn't in much pain (not sure how they would know??) but that he would start to have decreased mobility and more continual tripping/falling over time. Incontinence was also likely to occur, not that it's a huge problem with outdoor animals.

She gave him back to the person she originally bought him from and purchased another horse, so not sure how well he eventually fared. At least your dear sweet boy is in his 20s and had a good long life. JT was only 14 when diagnosed.