Since the big 50 miler, things have been busy..new horses, injured horses, party planning and another horse show but maybe the most interesting might be that we took in this guy. Handsome isn't he??? 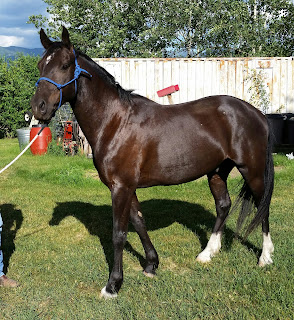 From a distance I have to look at the white on the legs to tell him and Brego apart.

Did I mention his story??? ok, guess I missed that detail...

So yours truly saw an ad  at a local coffee shop. It said Midnight needed a new home.. a 10 year old Mustang/TB gelding. He was green.. but had groundwork , supposedly.  His price was "negotiable". Owner was getting out of horses.

T and I talked about it and he went to go look at the horse while I was away at the Idaho endurance ride. He  worked Midnight a couple of times on the lunge where he was currently living, talked to the owner several times and they worked out an agreement that we would take him on trial for 30 days. He had some bad history but seemed to respond to T pretty well in those first couple of meetings.  We weren't really in the market for another horse, but we are always looking for opportunities to take one in that needs help and then rehome. His movement was nice enough that possibly,  we could train for jumping and eventually sell as an eventer.  Or use him as a replacement for another archery horse since we lost Rebel in November. Either way, he was going to be used.

As the story goes, the owner said had sent him to a trainer a couple of years ago but took  him home early because the trainers couldn't get him to stop bucking. She had tried to ride him last year but had been launched a couple of times  and had lost her confidence, understandably. Midnight  hadn't been ridden since then, and owner and her husband were getting out of horses.

Maybe he was salvageable. I have seen T do amazing things with worse cases.

We saw the issue right away when T started working with him at home so it was pretty obvious that he needed to be  started him from the basics. Ground work first to build trust and repore. Anything Midnight  did know seemed like he was forced to do it and as a result , Midnight's reaction to everything new is fear based.  He tries very hard but his reactions are somewhat explosive. It became very clear to us that Midnight  was started all wrong and at 10 years old.. his issues won't be  easy to over come.

Over the last couple of weeks, he has slowly learned that life isnt going to be awful and has made some improvements but the theme with him has been 1 step forward , 3 steps back. T has not attempted to get on him yet. No sense until things on the ground get a whole lot better and safer. The last thing I want is my husband to get injured.

Whatever the previous trainer did certainly left a mess in their wake in regards to the mental state of Midnight. I have watched T work this horse nearly 6 days a week and once day is not like the other. Typically, a horse that has not been messed with too much makes slow progression, sometime with the occasional set back , but then eventually progression continues. The horse learns to trust and relax. They learn that its' ok to take their time to sort things out for themselves and  that it's ok to move their feet if they feel the need.  With Midnight, every day is a new set of challenges and just when we think we have him over one thing,  the worry and fear eeks back in.

If he sees something in the distance, like the neighbors horse or in one case, me dragging a tarp to put in storage, he wants to flee, even if the scary object is a long ways off .


If you put anything above him, such as having him stand next to you while you are on a mounting block (where a rider would be)  he loses it and tries to flee.


Anything touching his flank or shoulder sends him sideways or bucking and cow kicking violently.


These are just a few of the issues we have been working to get him through.

One night over dinner, puzzling over this horse,  I recalled that when we picked Midnight up to take him home ,it took him a while to get in the trailer. T, ever patient , eventually got him to step in nicely without a fuss, but it took an hour. The not so patient husband of Midnights owner wanted to get on with his evening plans.  We were definitely getting in the way of those plans.

That was when he (a rodeo wanna be guy who used to rope apparently) made a joke , that I recalled. When he saw that it was taking a while to get Midnight in the trailer and he was about done waiting, he made a comment , half joking,  "guess we need to see about getting out that cattle prod out again.".

At the time, I thought it was just a joke..but now.. I wonder.

Seeing the issues with this horse, makes me think maybe there was some truth to that so called joke. The husband didn't exactly strike me as the nicest of people. All he could talk about was spurring his rope horse to get him to do what he wanted.. and how terrible the horse was.

We will never know the truth but it would provide some explanation to what this horse has suffered.

While we have made progress with Midnight,  it has been incremental. Right now he isn't safe for anyone to ride without alot more time, and maybe not ever. Hard to say.Sometimes the damage is too much.

We have a couple more weeks left on our trial period. I am hoping for a miracle but I am cautiously optimistic.  I  hate the thought of returning him to his owner, moreso his owners husband but I also know that we don't have the resources to keep yet another pasture muffin around. He has to be useable and/or saleable.

Midnight sounds like a big project, but he is very handsome! Undoing others mistakes is probably the hardest part of horse training, I'm glad T is up to the task. Midnight could use a better life with better opportunities. Thank you for giving him that chance!

yes, he is definitely turning into a bigger project than we anticipated but we are trying. He has alot of good qualities. He truly tries hard to do the right thing and to handle him in hand, most things he is really good about. He seems to really enjoy all the added attention he gets around here lately, especially the belly rubs to get all the itchy spots from bugs . They are horrendous this year