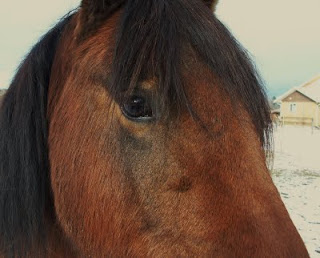 It's that time of year again, renewal time for AERC. It was easy last year. JB was the designated horse for the sport. I signed us up and all I had to do was focus on him.
This year, as you all know, Maggie appeared on the scene and was given a free pass to stay on at Acer Farm. My decision to keep her was based on the simple first hand knowledge that the breeding lines that this mare was from produced exeptionally tough horses. That was all the potential I needed at the time. (oh, and the big doe eyes played a part in the decision as well)Maggie arrived, on the verge of founder with one more glance at green grass and went immediately onto a new feeding program. It involved many months of being dry lotted with very small amounts of grass hay through out the day, a program that made her sour and unhappy about life in general, having been used to running on over 20 irrigated acres of lush pasture. Seeing her so unhappy, I began the process of getting acquainted with her by taking her out for walks or short excercise periods in the round pen. We spent many hours working on basic ground manners, something she was lacking. As time slowly passed, her body condition went from a high 7 to a low 6 in 3 months. She proved to be an athletic , strong mare, despite her weight and build. Explosive power when she is motivated. Getting to know Maggie was an interesting journey. For the last several years, my main focus had been JB. While I own and ride several of the other horses here at Acer Farm, they are mostly well trained or much older and I don't spend alot of concerted "training" time with them. Maggie was the second addition to my training program. I quickly found out that she is nothing that JB is and everything that JB is not. There could not be two more polar opposite personalities than Maggie and JB.
Since June, the weight has continued to come off and she was beginning to get a little bit better conditioned with her sessions in the round pen. I got about 20 rides on her by late summer and she was beginning to show me more of her personality, as she felt better and better. Today, she is about at a weight that is as close to ideal as I can get her without alot of conditioning but she remains a large , round barreled, flat back horse. It's her conformation and there isn't much more to be done about that. She can probably still lose about 50 pounds and with additional condition , she will develop more muscle, but her build will remain similar to what it is now.
I have labored over whether my initial hopes of making her an endurance prospect were realistic . Is endurance really the right path for her, given her build? It's a frequent topic of conversation with my husband, since he was the one who bred, raised and trained these Lippitt Morgans for years. He surely has the experience with what they can and cannot do. We both agree that this mare will certainly endure the mental and physical toughness that the endurance sprot demands, however he does not share my concern in her ability to cool properly and recover quickly enough. Tom has always used a Lippitt Morgan as his riding horse, whether it was his journey on horseback from New Mexico to Montana, long days of helping with working cattle, or the miles he has ridden in the backcountry. He is drawing his sentiment of the ability of these horses directly from his experiences of these horses. But still, it wasn't usually at speed so I am left to wonder.
Concerns aside, I decided that there is truly only one way to find out. That is to begin , as initially planned last June, conditioning Maggie for the sport this spring. I will monitor and track her recoveries closely and see what she has to tell me. A horse that is fit to continue is different than a horse that will simply continue regardless of whether they are fit or not...Time and miles will be our guide.
So , with my decision made, a heart rate monitor on the Christmas wish list, I added "Z Halcyon April" to the renewal application for AERC. It's signed ,sealed and delivered. Maggie will officially join the AERC crowd.
We'll see what Morgan has to show me. 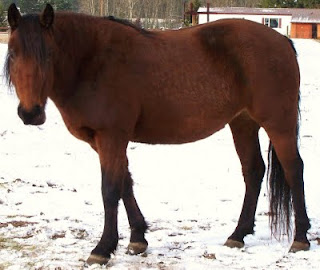 Good luck! It's always so exciting to have a new horse to work with!

She's gorgeous! I've always been partial to Morgans--smart as whips and tough as nails.

Thanks Elly for the nice compliment on her. I am pretty partial to her...Maybe we'll see you at the Flamingo next season. I hope to make it down for that and bring both her and JB.