So vacation is over and despite the snow covering the ground, it's time to get into spring riding mode. Spring break is next week. That means Tom is home. He will be busy doing projects around the house and believe me, the list is long. The first order of business  is getting Maggie fitted for her Borium shoes so I can start riding her on the trails, which are still icey and snowy.  The farrier will bring them for me all made up so that Tom can install them.  Borium shoes are expensive enough,  but having the farrier put them on is one of those expenses I can bypass. I thank my lucky stars every day that I have a husband who is also a talented farrier.

The other big event on the to do list is getting some work done to the horse trailer. I had really hoped we were going to get a new trailer this winter. We looked and looked and found a few potentials but even a good deal on a horse trailer is still thousands of dollars for what we want. That's a big investment. Our old beater is just going to have to make do for a bit longer. There is a lot I like about our old steel clunker. For one, I am comfortable pulling it. The length of the goosneck is long enough and makes turning and backing much easier. It's an open stock trailer and its heavy but horses seem to travel well in it, even horses who have never traveled well in a trailer seem to do fine in this one.
Tom  customized it when he first purchased it new in  1997 to install a wall of plywood to create a tack room. The tack room is tight  but it works okay. We just stick a folding saddle rack in there and hang bridle hanger on the wall for halters and bridles. We replaced the wood boards for flooring in it a few years back. Best of all.. The dang thing is paid for...

There are  some not so great things about it that are beginning to grate on my nerves. It's beginning to rust. That gets really expensive to have fixed. Not sure what we are going to do about that yet. There are couple areas that are worse than others.  One major fix that we are planning to complete is the axles. Years ago, we flipped the axles , making the trailer's ground clearance  much higher. I wasn't keen on the idea but Tom used the trailer for hunting. He needed that ground clearance to get to the area he hunts in without damaging the trailer. It's Montana backcountry...roads that are unmanaged. Use your imagination a bit. Roads with wheel ruts 2 feet deep...  He doesn't hunt in that area anymore and it's unlikely he'll be going back anytime soon.We decided it was kind of dumb to keep the trailer jacked up like that..The horses have to jump in and jump out, which they manage just fine 99.8% of the time, but there have been times where they have miss calculated thier departure and have ended up cutting their leg. It pisses me off every time..

Having a "lifted" trailer also creates some other difficulties for short legged people like myself to get in and out of the tack room easily.I usually have an old milk crate I use as a step but there have been mishaps with that too. Surprisingly, they aren't always stable on uneven ground. More than once,  I have stepped down onto my milk crate, usually in a hurry, arms loaded with saddle, bridle, and packs,  and have ended up in heap because the flippin millk crate tipped to one side. It's surprising I haven't broken something yet..

So, we are flipping the axles back to how they should be and I will gladly say goodbye to my milkcrate..

We are also going to install some sort of protective rubber on the lip on the back of the trailer because it's just bare metal.. sharp metal. This is the metal lip that the horses can catch their leg on if they misstep. Usually its a scrape to the front of the cannon bone... 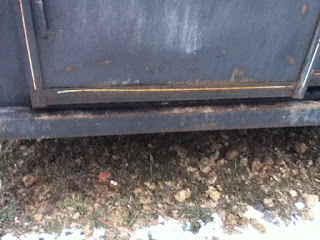 Anyone have any suggestions for what product to use to cover this up???(please don't say duct tape!)

The trailer is also getting a new set of tires for the season. We have been limping along on less than adequate rubber for a while now and frankly, I don't know how we haven't ended up with a flat... so an investment in tires is a must do.Last but not least , the wheel bearing will need to be repacked which is just another maintenance thing we check yearly. Last year we didn't need to but this year, it has to get done.

So, the old beater of a trailer will have to suffice for another year.It old, ugly and not set up to make camping easy but it's paid for and it's safe. What more can a rookie endurance rider ask for?

Now where did I pack the tent??