I finally had enough reasons to break down and get my hay tested. I have considered it in the past but our hay supplier has had in done in the past and when we inquired, he always told us that everything comes back as pretty equal. I am not sure what "equal" really meant but he never offered to share the report with us and , actually , to be fair, I guess we never asked to see it. I never had much reason to because our horses have always done well  on it .  Healthy hooves, clear eyes, nice coats, etc. We pay a bit more for this high quality grass/alfalfa hay since it is our horses primary diet. We don't feed a bunch of supplements or grain.  Hay, loose trace mineral free choice,  and loose Redmond Salt free choice. That's it.. simple..

I have had Maggie at the boarding facility for over a month now. She was wormed the first week that she was there. Since she  has been there, she is on their straight grass hay because their alfalfa/grass is mostly alfalfa.  The quality of their grass hay doesn't look all that fantastic so I started her  on the usual vitamin/Mineral supplement I use during conditioning season two weeks ago to try to offset any nutritional gaps.

In spite of that,  I have noticed some things about her coat and behavior that I am not really liking .
I will start with her hair and skin.

Maggie, being a Lippitt Morgan, typically hairs up like a woolly mammoth for the winter with long , somewhat shaggy looking hair. It's pretty normal for a Morgan so it's never been a concern. However, this winter, and especially now,  it seems a bit rough , and unhealthy looking. Not glossy or smooth. It also seems to have an orangey tinge to it.  This could indicate an  imbalance in copper/zinc ratios or more likely an all out deficiency.

Inadequate copper and/or zinc will produce faded coats on horses, known as 'sunbleaching'. The orange/rusty tips of her mane and tail would probably confirm this as this is another symptom of a deficiency. The ideal copper to zinc ratio is 1:3.

Did you know that  Copper and Zinc are only two of several trace minerals that are almost always deficient in horses? When it comes to trace minerals, it's an interesting dance. Too much of one will cause another to not be absorbed.

Balanced Equine Nutrition website has a good article about all of the symbiotic relationships if your curious. For this post I will only focus on a couple.

Did you also know that it's nearly impossible to get this ratio of Copper/Zinc correct if your horse is getting alot of iron in their diet?

Too much iron  combined with low zinc and copper levels is one of the most common issues with providing a balanced diet for horses.  "The high iron concentration interferes with the absorption of copper and zinc, making  already low levels of these trace minerals even less available for the horse", according to an article written by Getty Nutrition.

This presents a unique problem because I primarily feed hay and most hays alone in the Northwest   are already high in iron.

Did you also know that  unlike humans, horses act an iron storehouse?  I had no idea on this one. We can pass it, horses are less able to do this. I suppose at some level horses must be passing some iron through their system somehow because if they weren't it seems we would see alot of iron toxicity? That's a question better left for a vet or a nutritionist to answer..

Typically if the horses coat is rough, it's common that their feet are also in bad shape. In this case, Maggie's feet are in tip top shape, albeit a bit soft with all the mud she has had to be in for a while.

Behavior- Maggie's behavior has been a complete 180 under saddle while at this facility. She is nervous, anxious, spooky and tense whenever I ride her. Alot of it has to do with the "energy" at this barn. Lots of rodeo and gaming folks are there. As a result, lots of bothered, anxious horses in the arena at the same time we are. But after being there for 5 weeks, I would expect she would have adjusted a bit. She hasn't. A second factor to consider is that it is also spring , and she is starting to cycle. This alone can change a mare's behavior dramatically. However, Maggie's typical response , especially her first few cycles of the year is to become lethargic and cranky. She is still somewhat cranky but definitely not lethargic at all. She is hyper reactive to everything.

Without knowing what is the bigger influence is on Maggie's behavior, I could make an assumption and opt to supplement with Magnesium which is a common supplement for similar behavior changes that are not related to cycles.  Excessive calcium also causes irritability, twitching, spasm and hypersensitivity. When the calcium:magnesium ratio is too high , extra magnesium will help.

The bottom line is that I don't know what the calcium/magnesium levels  of our hay at home is  so I would be wasting money to just start throwing supplements at her and hoping for the best.

I am  unsure if Maggie could have had this quick of a change from 5 weeks eating the boarding facilities hay. When I look at the rest of our horses, I see some similar "not so great" coat conditions so it could be that our hay isn't quite up to snuff . Since Maggie is coming home in another week I figured it might be worth taking some steps to get some concrete answers.

My vet loans the hay probe(you  have to have this for appropriate testing) out without a charge so that is really nice.

I knocked down several random bales from the neat stack..(this is going to kill T to see the mess but I am not restacking those bales) 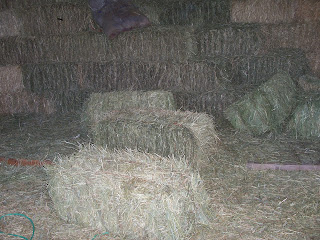 You'll need a drill.Preferably an electric one because my battery powered drill that had a fully charges battery didn't even make it through the first sample.  One plastic bag for each sample. Make sure you lable each bag. I used the method of numbering the samples 1-10 and the name of the ahy supplier. I have two  and I only had two bales left from one of the suppliers so I could only take two samples. Initially I labeled each bag with a marker  but it didn't show up well so I ended up using sticky folder tabs on the bags instead.


Insert drill into the short end of the bale at a 45 degree angle. 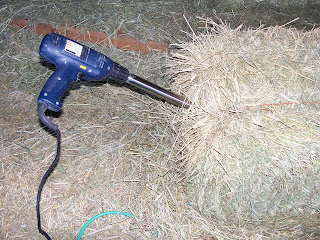 This was the hardest part of the whole thing. There is a little copper button on the end of the probe that you have to press in to release the end cap of the probe so you can push the sample of hay out with the wooden dowel. I found a tool in the hubby's tool kit that did the job perfectly. 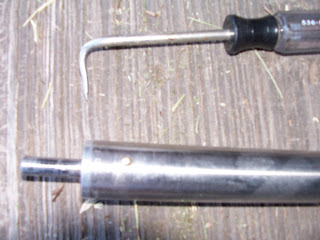 Once the end is removed from the probe, the wooden dolly is used to push the sample out 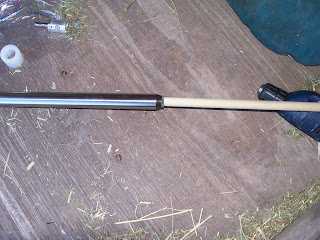 And into the sample bag 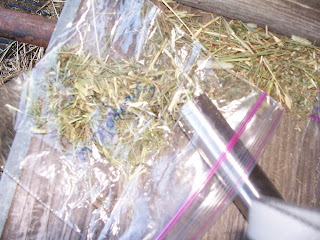 It's a pretty simple process . I only had one small issue. On the very last sample, the probe came off the drill. I discovered that I will be buying a new drill attachment as this one got completely stripped out... The probe puts a ton of torque on the drill . You are sufficiently warned! 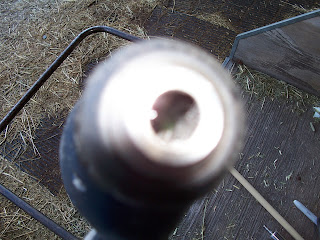 Take your samples, fill out the form and stuff it all into the envelope with a check and mail it off.. I expect to have results in 7-10 days because I also opted to do the selenium test which takes a bit longer. 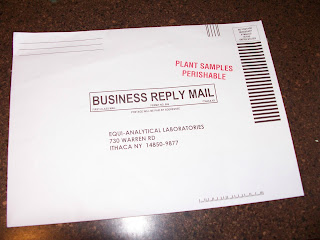 Wow! never thought to have Hay tested? Maybe we should, maybe the vet might offer some information, over here we tend not to worry too much about hay. But maybe we should. Great post.

Can't wait to hear your results!