When I started the "chase" in the sport of endurance , I made alot of lofty long range goals.I started out thinking , foolishly perhaps , that in a few years I was going to take my little Barb stallion JB,  all the way to Tevis.
If you have followed this blog very long, you know how that story ended. 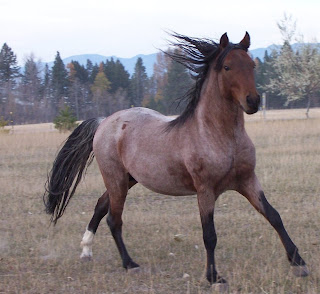 But still, I continued, starting over with a new horse.

A snotty , fiery little Lippitt Morgan mare that was supposed to just be a companion to the mare that was here to be bred to JB but ultimately ended up being my next project staying.  That 100 mile endurance dream soared again when I finally manged to get her going under saddle. Strength , speed and a whole lotta attitude. Maybe , just maybe.... 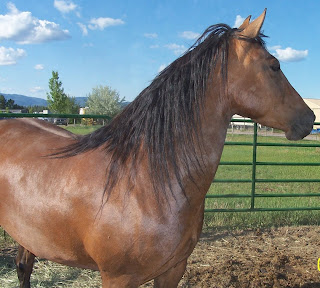 When I decide to do something I tend to grab a hold of it and not let go until I get what I set after.  Some call it stubborness, foolishness even.  I call it ambition. It's what fuels me , drives me to be better , to reach just a little further.  When I was a young adolescent riding the show circuit, it 's what won me several blue ribbons. The simple fact was that if I wanted to place in the showring, I had to  work harder to make it through those cross country  courses with my Palomino ex barrel racing Quarter horse.  He was anything but a "made" show horse that so many of my peers were mounted on, high priced TB's or warmbloods purchased  specifically by their parents so they could see their kids win.  Alot of times I lost to those fancy horses but alot of times I won.. and I could hold my head high because I earned it. I am a firm believer in working hard to get what you want and rarely are things in life free.

With Maggie , it's been another challenging road. Once again I have found myself having to work pretty hard to get any break through's in Maggie's training. I would say out of all the horses I have started,trained, and ridden, she has been the most challenging. I have not been able to attempt a 50 mile ride, much less a 100 miler.  I have been at this sport for 6 years or better now. For a while last fall, I got pretty down about that.  I had to reevalute things , again.

I have this bad habit of having alot of high expectations along with that ambition, and then when I don't quite get there, I fall prey to alot of negative self critcism.

Being aware of it is half the battle. If nothing else, the sport of endurance has taught me alot about bouncing back. I have learned that instead of setting those big lofty goals and getting thrown off course(which is just going to happen from time to time)  and then disappointed,  I set a lot of smaller more immediately attainable goals.

Last year I wasn't sure I would be able to compete  at all but I still wanted to condition Maggie in case the opportunity presented itself. As it turned out,  I managed to get Maggie fitter than she had ever been or anyone ever believed she could ever be for that matter. I turned  that round little Lippitt Morgan mare into a trotting , hill climbing power house.
All that time on the trail together alowed me to start to dial into what makes Maggie tick. We were getting in synce and I even felt like I could trust her in any trail situation. We completed a  CTR where we managed to out maneuver alot of seasoned 50 and 100 mile arabians on the trail that day, and we  completed a 30 mile AERC LD and even top tenned. Two 30 mile rides completed with a healthy horse and new found trail partner at the end.  Success? Absolutely.

Being driven by alot of ambition and also having  self critical tendoncies at the same time can sometimes be like throwing two wild Tom cats in a gunnysack together and hoping they both come out as buddies. Only one is going to come out on top.

The ambition drives me ahead and the slef criticism gets me in ruts, and then the amibition pushes me ahead again.It can tend to be a vicious cycle maybe it all balances out in the end.

This spring, that smaller bite I have chosen for Maggie  has been to get her thinking less about speed and conditioning and thinking more about the finer tuning in horse training. I am asking her to focus more on the smaller thing, be less reactive to my cues, don't rush, and all kinds of little things that will lead into bigger things like a quiet canter depart.

Believe me, I would much rather be conditiong for endurance.  It's much easier to just point her down the trail and go but  she has more to offer as riding horse and I want to bring that out.

Last night, because of ongoing complications with the franken finger, Tom agreed to work Maggie this week for me a few times. For over a week now he has heard me complaining and whining about my riding sessions at the boarding facility with Maggie.

I had been feeling  like I wasn't getting anywhere with her and instead  going backwards. There is that high expectations thing again...

He rode her around and went through all the routine things I have been focusing on along with a few other things he works a horse through.  He saw what he called her sticky spots that I had been complaining about. This was the first time he had ridden Maggie since last spring. He hopped off and handed her to me. Typically he doesn't say alot when he rides a horse unless he's asked. This time he offered it without me asking. He said he really didn't understand what I had been complaining about . She was so much more improved from last year. She was listening , responsive, and soft. He was surprised how nice she had become under saddle since he last rode her.

His words... "you have gotten some pretty big changes in that mare".

I thought about that for a while on the ride home . He's not the kind to just say something to make me feel better..

Once again, I had gotten so caught up in the doing and chasing of that goal, that I got tunnel vision.  I could not see the accomplishments made.

I may never do a 50 mile ride or even a 100 mile ride. It's hard to say.  Right now , its more important to learn what I can from the horse that I have and enjoy the ride. There are alot of amazing things that can happen along the way when your not looking.
Posted by Jonna at 12:31 PM