Kicked Through the Wall

I went out this morning to feed and Brego and Maggie were rather spooky. (I forgot to mention we brought him home from the jumping  barn a couple of weeks ago) For Brego , he tends to be a bit spooky so that isn't out of the norm for him, but not Maggie. Both horses were tense looking and were at the far corner of the corral. Brego would not approach the fence like he usually does for feeding. Maggie hesitantly came up to greet me. Both horses kept looking in the direction of their shed.  I looked over there , thinking it was just Xena behind the spruce trees snuffling around looking for the neighbors cats but quickly noticed the stack of pallets that we once had leaning up against the outside of the shed wall were now laid over on the ground. Then I saw this  lovely redesign of the wall of the barn .


It appeared that the kick went completely through, knocked over the pallets due to how hard the wall got hit, and then whoever did it, jerked their foot back through. I cringed thinking of what waited me for an injury. Both horses were upright when I came out so that was a good sign.. At first I assumed it was Maggie  since she is constantly getting chased away by Brego and she will often kick at him. When I checked her legs, there were no signs of any issues..

Surprisingly I found this on Brego. Not one leg...both legs . Badly banged up. It must have happened not too long before I found him because the swelling has not set in too bad. It doe not appear there is any damage beyond some health scrapes and alot of lost hide. 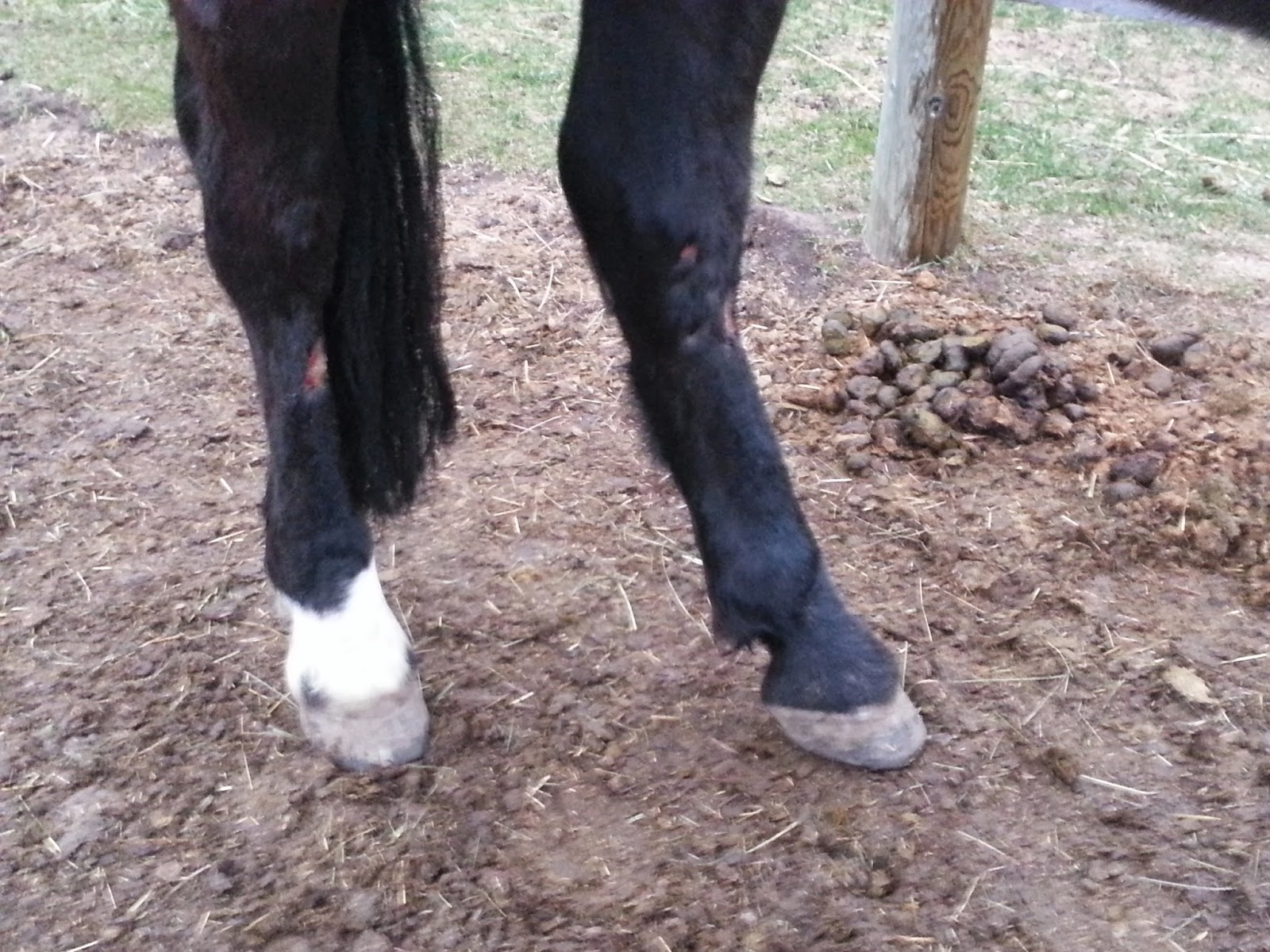 Not sure how he managed to get both legs cut up..He either got cast and got a leg through , which would explain why his right hing has cuts up high , or he got one leg and then struggled to get his leg back through and dinged up the other one in the process.  Looking at the dirt in the barn, it looks like he was struggling and was down but I have never seem him lay down in that barn so I really can't say.

Doctoring on Brego is never a  party either, especially his back legs. Tom is out of town for the weekend of couse so any doctoring is on me. Brego has managed to cut his back legs a couple of time in the past and it's always when Tom is not around so your truly ends up wrestling with Brego to get his wounds cleaned and  ointment administered. Its no wonder this horse and I  have a love-hate (probably more hate) relationship. I am always the one causing him discomfort and doing stuff to him he doesn't like. He's not a good patient at all.

I won't bother wrapping him because without a second set of hands, it will be impossible.  I will just have to try to keep it clean with a betadine scrub it and antibiotic ointment and hope it doesn't get infected.

Meanwhile, we are getting torrential downpours..

Plywood....wonderfully forgiving. When I lived in WY one of our stalls was sided with plywood and my paint mare Revlon (who is has moved on to a new owner) was notorious for kicking at fly's and putting her feet through the wood. One of them was as high as my shoulder!

The scrapes do not look bad, I would be inclined to just hose them off and cover with some corona or swat, to keep he flies off.