These last few weeks  has been full of activities on many spectrums  but a theme has emerged it seems.

The spring weather has been absolutely unbelievable which meant that Glacier Park was calling me.  It was time to step out for my FIRST Glacier hike of the season,and as always, it never disappoints. 0 Atleast once a year, I hike this hike.It's just a thing most of the locals must do.  It isn't a terribly long trek so a good one to get the season started with. I was suprised at how LITTLE snow there was . It seemed more like July snow rather than April/May levels. Nonetheless, the Glacier lilies and a variety of other wildflowers were putting on a good show. 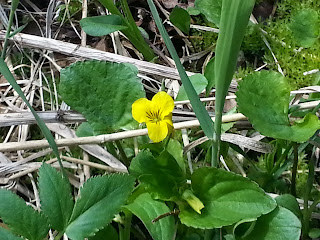 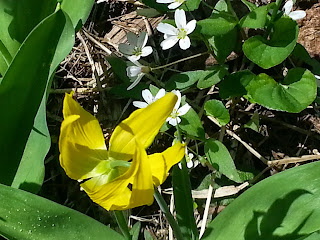 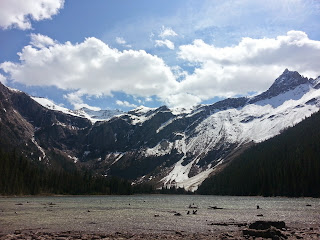 I have never owned a pair of  real "hiking" shoes before, never really saw the need for them. A retired pair of sneakers was always hanging around and always seemed to work in the past, although, I did recall having some issues last summer.
Given the level of pain I was experiencing this time around,  and considering I plan to do plenty more hikes this season, I figured it was time to throw out the holey, worn out sneakers and  get something that supports my foot more appropriately. I begrudgingly went and found a new pair of actual hiking shoes. My FIRST ever set of bonified hiking shoes.

I will feel so "Official" now out on the trail...I have plans to try them out this weekend.

With the first hike of the season out of the way, it was onto some other horse related firsts (Yay, right?)

We started with a review of last fall's lesson  , in case he forgot..which of course he didn't .

A simple rope around the barrel to mimic the feel of  a girth.

And then to walk with rope , while having a little upward tension put on the rope while walking..

We moved on to this, which was also a review of last fall. A blanket pad and the rope mock "girth"

From here we moved onto placing the saddle on and and off several times, with out the girth and just moving him around in the same way, while holding the off side stirrup up so it wouldn't bother him.

This procession was over the course of a few different sessions.  When it came to the actual saddling session, my hubby decided to do it while I was riding Brego, therefore I have no pics to share... :(
You will have to take my word for it ,  but it went about the same.. at first a little concerned and eventually walking around with his head down..

I have had 4 lessons  now with my new trainer.  We had kind of a break through a couple weeks ago. We have jumped our FIRST big REAL fence, a 2'3 Oxer.

As it turns out, Brego only jumps in really cute form when the fences get bigger..
As much as I like my cross rail and small vertical comfort zone , it was time to move on because apparently,  you can make a horse like Brego develop less than desirable jumping  habits if you spend too much time jumping smallish fences.........like jumping flat= bad

So, my comfort zone is being challenged..  Not only have we taken a  step towards bigger fences but we have CANTERED our FIRST jump.  Brego's  thing is to rush and get "chargey" when we approach from a trot, but to our surprise, he didn't seem to do that in a canter. He  surprised all of us  but time will tell if it was just "beginners" carefulness or if he is going to maintain that way.  That was a great discovery since we have mostly been trotting in , landing in a canter, asking for trot again, and then taking the next fence...

In spite of all this good stuff happening, we have still been fighting with saddle fit for Brego.  You might recall this post about the jumping saddle dilemma?

Remember that borrowed saddle I thought was working out great????.

I LOVE the saddle. Brego.. not so much.

Its comfortable for me. I feel super secure in it and it puts my leg in a really good position. However, it is NOT working for Brego.  He started in with Head tossing, hollowing back, pinning of ears, swishing of tail, and once he even kicked out when I asked him for a canter. The crazy thing is that to look at the fit, it really doesn't appear to be bad fitting. Atleast not bad enough to warrant the big reactions I was seeing in Brego. (and we ruled out all other options like teeth, or soreness somewhere else)  There were no overly obvious signs of bad fitting like too much rocker or too much tightness in the shoulders. The only thing I did notice was the the hair was "scruffed" the wrong way behind his shoulders after a ride and there were slightly drier areas than the rest of the sweat pattern but nothing that screamed. "THIS SADDLE IS HURTING YOUR HORSE".Brego didn't even react if I palpated the area.
In the long run, we concluded we probably had a "Princess and the Pea "situation here and that it was obviously causing him some discomfort , thus hindering our progression for sure. For now, I am back to riding in my Close contact because I know it fits him. Besides the fact that  I feel like I am going to tip over the front of it, Brego is much happier.. and we can carry on...as for me, I can get by for now.

.....but long term its not the best solution and since we are talking about firsts.. I have this coming......My FIRST All Purpose jumping type saddle.

The saddle is coming as a trial . Historically , I always disliked a deeper seat for jumping but after experiencing the difference with my friends all purpose,  I have come to my senses. Considering  I am also doing a fair amount of flat/dressage work with Brego, it just made the most sense to try going this route.

It's fully adjustable in the gullet and it has this other really cool feature in the panel design that supposedly eliminates the part of the panel that restricts the shoulder movement. I am optimistic this will be a good option for the princess.

This particular saddle brand actually has a sister brand that is what I was originally planning to try, but they had no trial models available. The two models are identical except the sister brand is partial leather and partial synthetic , and offered a lower price point whereas the one I have coming is all leather.  (and a much higher price point) I am sure there is a marketing scheme in here somewhere.

Send out the more expensive leather model , rider will fall in love and just have to have it..

The silver lining here is that until I get a more supportive saddle that works for both Brego and I , fear of being launched over a fence head first in this damn saddle has developed one hell of a strong leg position which makes my trainer super happy.

There might be a few more FIRSTS coming our way . Originally,  I wanted to hold off even posting this until I could include those things as well,   but that could be two weeks away before I know for sure.. and it  could all come unraveled between now and then so while I  can't won't give any spoiler alerts as it might jinx things , I can tell you it should be exciting...so stay tuned.

In the meantime, here is a photo I like to just stare at.. because he is developing so darn nicely..and I don't have barn blindness. nope.. not me.. 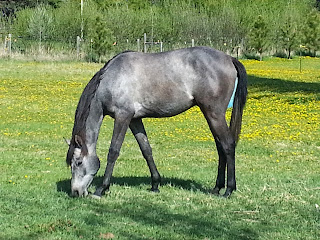 I'm barn blind too, Otto is just too damn handsome! Thanks for the photo update. I envy your glacier hiking, that is one amazing area.

And that new saddle looks comfy, I will cross fingers and toes that it works! I hate saddle shopping/fitting.