This first week has purposely been kept pretty low key. A three day trailer ride is hard on an adult horse and moreso on a youngster. I have kept busy making sure he is comfortable , giving him as much to eat as he wants and getting to know each other.  I go out to visit him several times a day , refilling his water buckets , giving him more hay , or cleaning his pen. He is pretty much like a big baby. Eats, mostly constantly, drinks, poops, lays down, rinse and repeat. It was only a day or so ago he jumped and bucked and ran around a bit. This colt has legs that go on forever and an appetite to go with them. He is definitely in need of increased calories. We are slowly adjusting his grain rations . I started introducing Safechoice Mare and Foal with some beet pulp. He pretty much thinks it's the best thing ever. I also started adding Equipride as a top dressing. Hopefully it will keep me from needing to give him too much grain while still covering all of his nutritional needs. Given his size, balancing his growth rate while maintaining his weight will be an ever adjusting thing. Right now, he is 660 lbs and about 14.1 hands. He 1.5 years old. He's not exactly little. 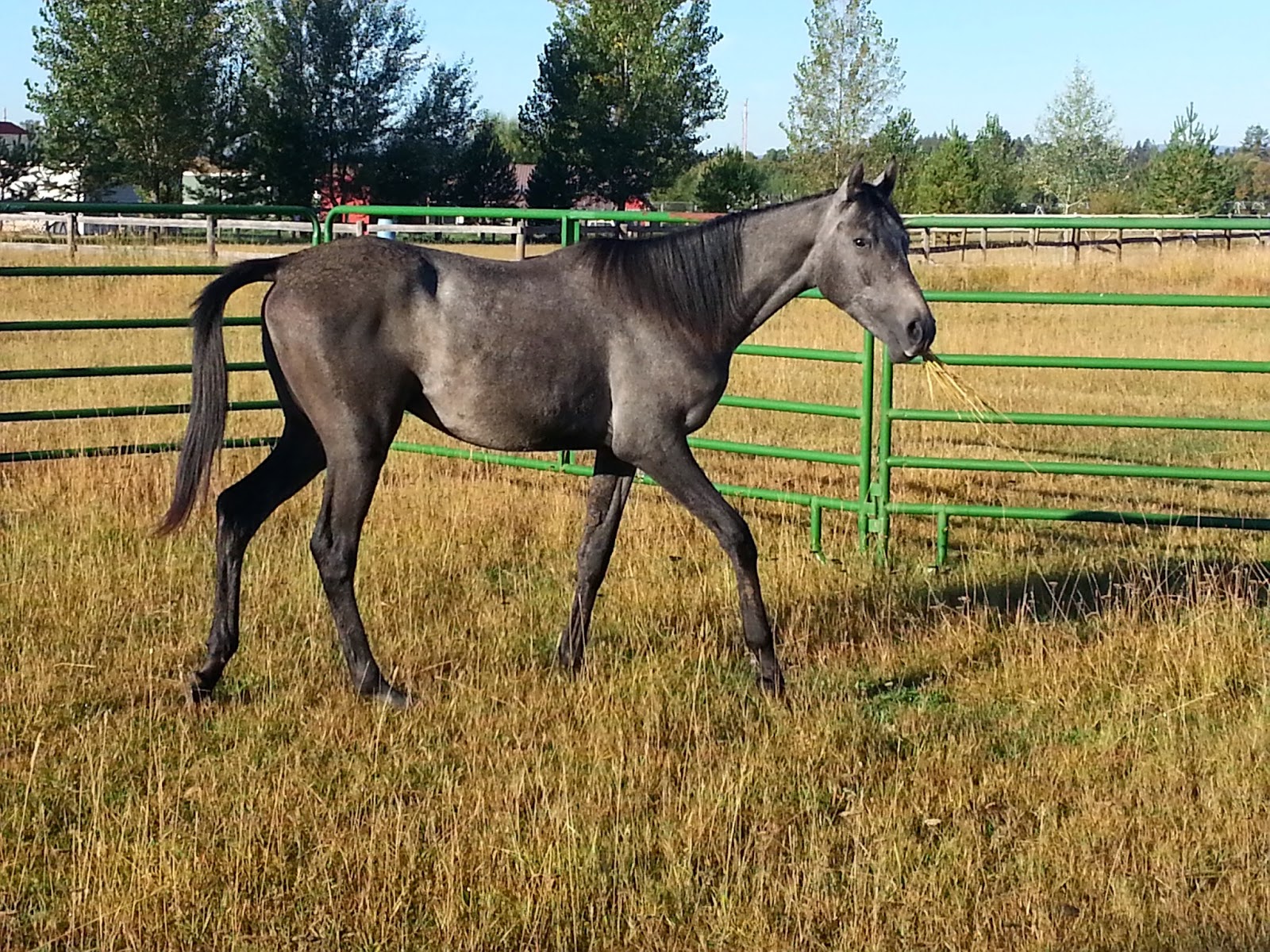 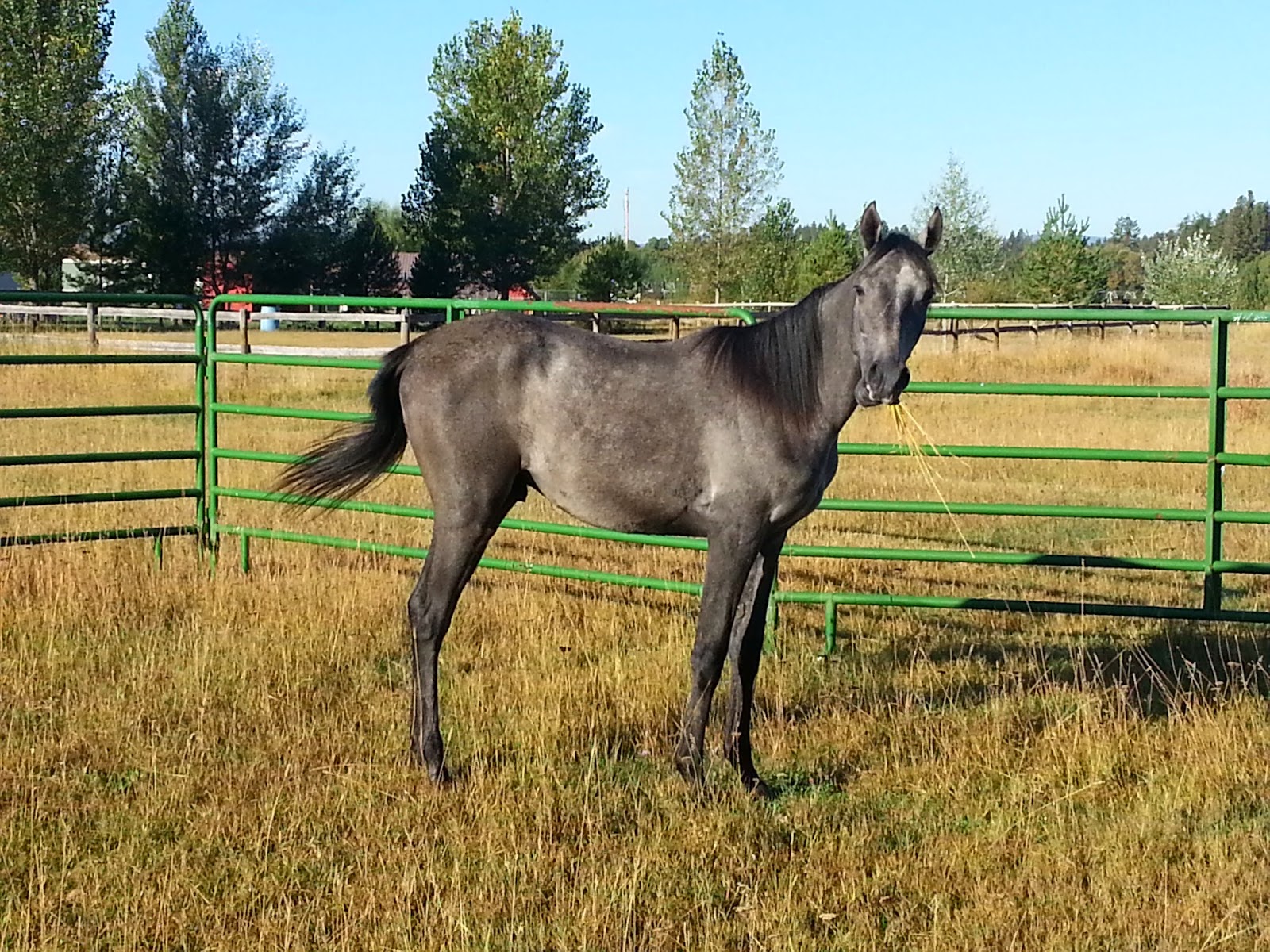 From what I can tell so far, he is a pretty affable colt . He's very sweet natured and loves attention. Yearns for it.  By the second day he was greeting me with a nicker as I approached his pend. He doesn't  seem to get overly concerned about things and seems to take it all in stride. All very good signs. He knows practically nothing and it's very evident no one has asked him to do much, but he seems to be pretty willing, even if he is unsure. We have had alot of noise around here with wheat harvesting, road construction, neighbors revving engines on dirtbikes, plus we live right near the airport and the Police department's shooting range. He doesn't get rattled by any of it.

I take him for daily walks around the pasture so he can  get a sense of his surroundings. He  doesn't lead very well so it's kind of like walking around like a drunken sailer. He seems to prefer to walk on top of my feet or crowd into me with his shoulder,  or walk directly behind me. The concept of walking along side of me is a foreign concept, but I have already started working with the flag to begin to teach him how to walk on a lead. He seems to be a quick study. He has already started to look forward to his walks because then he gets to lay eyes on the other horses he can hear but can't really see from his corral. He desperately wants to meet them and likewise for the other geldings. They are curious and will occasionally call to him.  He's terribly lonely but his quarantine is short lived.

His feet are the most concerning thing to me right now. It does not appear anyone has ever done anything with his feet.  His has pretty long pasterns right now but  his right hind  appears to turn out little more from the pastern.  At this point, I am thinking the turning out looks worse than it actually is because of his overgrown foot and how he has worn it.  It seems to depend on how he is standing. Sometimes it looks more pronounced then other times. It's not uncommon for  young horses with long legs to have legs that are less than arrow straight. Usually with turnout and plenty of running around, they strengthen and straighten out just fine.  My initial thought at this point is that its likely a combination of weak legs from being penned up and not able to run combined with lack of proper hoof care.

One of the days  I was leading him out of his pen to take him for a walk , he must have caught his one leg with the other hoof (they were so long and had  pretty signifigant flares to the inside) and reacted like he just cut his right leg off.  He held his foot way in the air and nearly tipped over. Obviously it hurt but I couldn't see a  cut, blood or anything obvious that would easily explained his reaction. He wouldn't let me touch it.  After a  minute or so , he walked out of it and seemed  fine.

That night, when Tom got home, we planned to start working with his feet anyways and I mentioned the reaction Otto had from earlier that day with his right leg .We  took a closer look now that I had a second set of hands.

We discovered that on that same back right, he has what appears to be an old injury of some kind. There is a hard nodule or lump there and he is very tender if you touch it, promptly jerking his foot away. Same reaction from earlier when he caught himself.  Whatever it is, its closed up and looks like there was a scab that recently fell off  but he definitely didn't want us messing with it. That made things a little difficult in trying to work on trimming that foot, which happened to be the one foot that needed the trimming the worst ! But atleast I had an explanation now.

The good news is that overall he was a  pretty good boy about having his feet handled,(all but the back right) considering he probably hasn't ever had it done.  He came around pretty quickly and we were able to take some of the flares off. This is going to be a process to get his feet in shape.  I should have gotten before photos but was a bit preoccupied.

As much as I didn't want to add any  stress to his life,  I wanted to know what we were dealing with on the back right, in case there was some kind of foreign object stuck in there. He wasn't lame on it or anything but it seemed like it was something that warranted a closer look and since he didn't want to cooperate to let me look at it, I decided a trip to the vet was the best thing , where they could sedate him.
The vet couldn't really determine anything. Ultrasound revealed no foreign object  or damage to any tendons or ligaments . All good news. The nodule does however run right over a nerve , which could be why he's so sensitive. They mentioned Sarcoids as a possibility but honestly, they weren't sure that was it either because it's not really presenting like a sarcoid at this point.


In the meantime, I started applying MSM and Aloe Vera gel combined into a cream. I figure it can't hurt, and if it is a sarcoid, it won't get any better. The only trick is getting it on there. That is another story.

for some reason feedly REALLY doesn't like me commenting on my phone or ipad so I have to wait until I'm at a computer to come over and leave a comment. But even if my electronics are stupid and you don't hear from me often - know that I'm reading these posts and REALLY enjoying them! Part of it is I have a young horse too and I enjoy seeing what is working for you and not and it gives me ideas. He's so handsome! Interesting about the foot.

Hi Mel- I don't use feedly but have heard others with similar complaints. Thank you for reading my posts. I still read your quite often as well. I live vicariously through you and Funder and all of your adventures!. It's always an interesting journey with a youngster .Thank you for the compliment on Otto. He is so gawky right now!! I have raised and started several and every one is unique and teaches me something new. I am sure you are finding that with ML. It's fun to start them , and at other times a bit maddening! I hope you can learn something interesting from me and likewise with your experience with your filly. Thanks again for reading!